Outrage as Range turns Netzpolitik treason storm into constitutional row | Germany | News and in-depth reporting from Berlin and beyond | DW | 04.08.2015

Germany's chief prosecutor said the government has interfered in the rule of law out of political expediency. But critics see hypocrisy in his differing policies in pursuing "Netzpolitik" and the NSA. 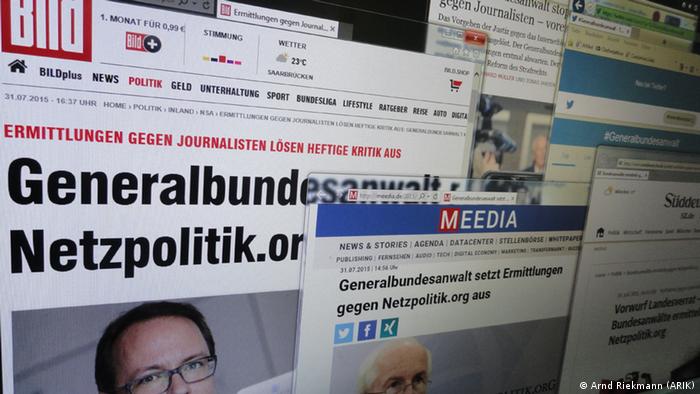 Harald Range, close to retirement and politically isolated, decided that he won't be going down without a fight. The statement Germany's chief prosecutor delivered on Tuesday turned the controversy over treason charges against "Netzpolitik.org" into a constitutional dispute.

"To influence investigations because their possible result may not appear politically opportune is an intolerable invasion of the independence of the judiciary," Range told the assembled reporters, before disappearing without answering any questions.

Range's position became even more precarious over the weekend when Chancellor Angela Merkel joined Justice Minister Heiko Maas in distancing herself from the treason allegations against "Netzpolitik.org," and underlining the importance of press freedom. 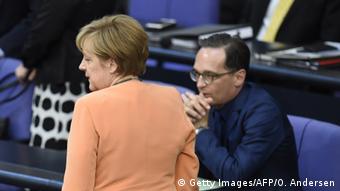 Merkel backed Maas at the weekend

Range's side of the story pushed the blame for the debacle squarely onto the government, specifically the Justice Ministry. He claimed that in mid-June, "to preserve and secure objectivity," he had commissioned an external report to assess whether or not the documents published on the "Netzpolitik" website constituted state secrets.

"The assessor informed me yesterday that, according to his preliminary assessment, the documents published on April 15, 2015, were a state secret," Range said. "The assessor has therefore confirmed for now the legal assessment of the state prosecutor, and of the Office for the Protection of the Constitution [Germany's domestic intelligence agency, who pressed the treason charges]."

Range then says he passed on this verdict to the Justice Ministry, who told him to immediately stop the assessment.

Germany's social media promptly exploded in outrage. Many pointed out the discrepancy between Range's apparent zeal to pursue "Netzpolitik.org" and his failure to investigate the charges against the US National Security Agency for hacking into Chancellor Angela Merkel's mobile phone.

In June, Range had announced that the investigation into Merkel's cell phone affair was being dropped for lack of evidence. That decision was heavily criticized by opposition politicians, not least because the parliamentary investigation into the NSA's activities in Germany is still ongoing and uncovering new evidence.

Some German Twitter users saw both decisions as politically motivated: "After #Range didn't investigate the NSA on the government's instructions, now he suddenly finds political influence on him intolerable," said one:

Others, meanwhile, pointed out that the prosecutor's claims of judicial independence did not necessarily square with his own constitutional position. Many people posted screenshots of the state prosecutor's website, which makes clear that the authority is a branch of the executive, not the judiciary. That means the post is answerable to the Justice Minister, who is therefore entitled to overrule Range.

"Netzpolitik" editor Markus Beckedahl was shocked by Range's hardline course. "Up until last Thursday I couldn't imagine that you could theoretically go to jail for investigative journalism in Germany," he told the TV network ARD. "On Friday, Mr. Range announced that the investigation against us was being stopped for now. His statement today sounds like we should be scared again."

Beckedahl appeared at a regular government press conference on Monday to ask for confirmation that he and his colleagues were not being kept under surveillance, which the government spokesman could not provide. "The fact that this attempt to intimidate us is continuing, and that the state and the security services actually could arrest us and put us in prison for our work - I would never have believed that could be possible in Germany in 2015," Beckedahl said. 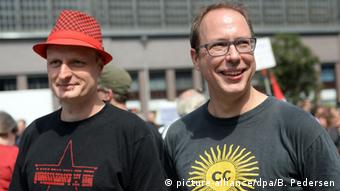 The writers of Netzpolitik.org have been accused of treason

Late on Monday, "Netzpolitik" also published a list of demands on its website, which included not only an end to the treason investigation and surveillance activities, but also an "unequivocal clarification that the accusation of treason was and is absurd: legally, factually, and morally."

Whose head should roll?

Opposition politicians, meanwhile, have been struggling to work out whose resignation they should be demanding: Maas, Range, or Hans-Georg Maassen, head of the intelligence service? Maassen pressed the initial charges, but Range and Maas hold the responsibility for the ongoing investigation. Maas' only action in the proceedings, which he has admitted he has been informed of since May, was to warn the prosecutor against pressing ahead.

The Green party's Renate Künast, who chairs the Bundestag justice committee, is outraged: "I am basically speechless," she told the news network N24. "It started with Mr Maassen, who apparently wanted to show journalists once and for all what pressure is... and then a chief prosecutor who doesn't recognize the basic right to freedom of the press either, and a Minister for Justice who has the oversight and who hasn't done anything about it since May. It's altogether a rogue's gallery and a debacle for the rule of law."

The actual documents at the center of the storm, which "Netzpolitik" published in April to very little media attention, are a confidential budget plan showing that the Office of the Protection of the Constitution was expanding its Internet surveillance capacities. Though the details of the state's plans had not been known before "Netzpolitik.org" published them, the fact has been known since at least March 4, when Günter Krings, state secretary for the Interior Ministry, mentioned it in a parliamentary debate.

German Chancellor Angela Merkel has joined two of her ministers in casting doubt on a treason probe into two Internet journalists. She said authorities needed to be sensitive where press freedom was at stake. (03.08.2015)

The German Justice Ministry cautioned federal prosecutors against a treason probe into two journalists, a newspaper report has said. The affair has caused a heated row within the coalition government. (03.08.2015)

Germany's domestic intelligence chief has defended charges against Netzpolitik reporters to "ensure the fight against extremism and terrorism." Netzpolitik was to be investigated for publishing "classified" documents. (02.08.2015)

Water levels on the river typically drop later in fall, with knock-on effects for trade and industry. A government plan to deepen the crucial waterway in a bid to curb future disruptions is proving controversial.