There have been growing calls from the SPD and Die Linke for Germany's federal prosecutor to step down. The outrage stems from an investigation into two bloggers accused of publishing state secrets. 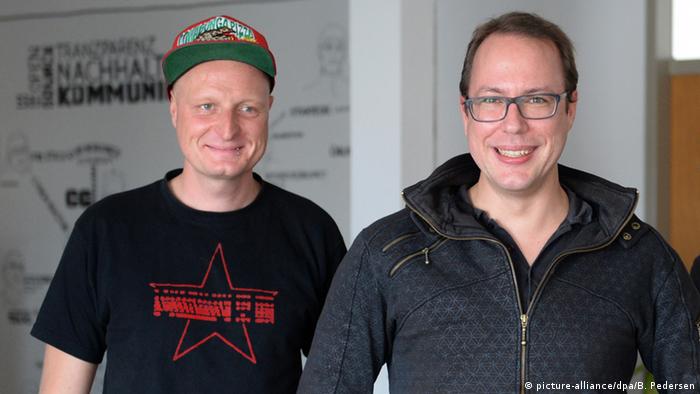 Criticism of German Federal Prosecutor General Harald Range continued to mount on Saturday over the investigation into journalists Markus Beckedahl (above, right) and Andre Meister (above, left). The two reporters are suspected of quoting a highly confidential parliamentary committee report that proposed a new unit to monitor the internet, particularly social networks.

"It's time for (the prosecutor) to go," he wrote on Twitter.

The deputy chairman of the SPD, Ralf Stegner, echoed the call. "Christian Flisek is right. The federal prosecutor general has gone down completely the wrong track, and has clearly lost sight of the purpose of his role," he told the "Handelsblatt" newspaper on Saturday.

Prosecutors began investigating Beckedahl and Meister after the German domestic intelligence agency, the Federal Office for the Protection of the Constitution, filed a complaint against the pair. The complaint accused the journalists of publishing two articles citing a classified document on their digital rights blog Netzpolitik.org earlier this year. If found guilty, the two could be imprisoned for at least one year.

Following an outcry from German politicians and the public, Range said Friday he would halt the official inquiry into the bloggers until initial investigations had established whether the material they published was classified as secret in the first place. The step hasn't quelled his critics, though.

"How do you come up with the idea to investigate two journalists, but not do anything to stop millions of people from being spied on?" Die Linke Chairman Bernd Riexinger said in an interview with "Handelsblatt" on Saturday, referring to surveillance conducted by the US National Security Agency in Germany.

"If the chief prosecutor ignores the constitutional right of freedom of the press and the task of journalists, then he is the wrong choice for the job," the deputy chairman of the Free Democratic Party, Wolfgang Kubicki, told "Welt am Sonntag."

The constitutional protection office's head, Hans-Georg Maassen, said he did not want "internal papers to be made public and that is why we are now trying to hang these journalists out to dry," news agency DPA reported Friday.

However, Germany's Justice Minister Heiko Maas said he doubted whether the leaked documents were a "state secret" whose publication would endanger German security.

The Netzpolitik blog has won a number of awards for its reporting, including one from the German government as part of its "Land of Ideas" competition and Grimme Prize in 2014.

Germany's domestic intelligence agency is taking action on Internet surveillance. The fact that journalists rather than intelligence agencies stand accused of treason is a scandal, says DW's Martin Muno. (31.07.2015)