German-Iranian national Nahid Taghavi is on trial after spending years fighting for women's empowerment and free speech in Iran. 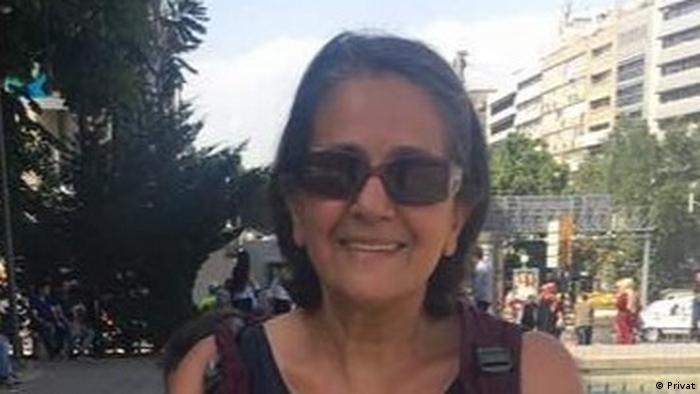 Nahid Taghavi was arrested in Tehran in October 2020

An Iranian court held the first hearing in the process against 66-year-old Nahid Taghavi on Wednesday, her daughter said, adding that her mother was facing a "security charge."

Taghavi holds both German and Iranian passports. However, Iran's authorities do not officially recognize dual nationalities, meaning that Taghavi is barred from receiving consular assistance from Germany.

The activist was arrested at her Tehran apartment on October 16 after years fighting for human rights in Iran, particularly for women's rights and freedom of expression, according to the rights group IGFM.

"Today was the first hearing of #NahidTaghavi. Another trial day is scheduled, date unknown," her daughter Mariam Claren wrote on Twitter.

"My mother was allowed to see her brothers. They hugged her. Her first hug after almost seven months."

Taghavi's brothers were not allowed in the hearing but were given access to her, Claren said.

Why is Taghavi in jail?

While the details are hazy on the security charge against Taghavi,  Claren told AFP news agency that it related to "propaganda against the state."

Claren said her mother's lawyer had only been given access to the charge sheet on Saturday and had yet to see the case files.

"She has no chance of a fair trial under the rule of law, until today her lawyers have no access to the statement of claim," IGFM spokesperson Martin Lessenthin recently criticized. He called for German diplomats to observe the trial.

Germany's Foreign Ministry said in October that it was aware of the arrest of a German-Iranian woman in Iran, but did not name the detained citizen.

Claren said her mother, an architect by vocation, had been held in Tehran's notorious Evin prison, and has been placed in isolation in the last four weeks.

"My biggest worry is her health," she said.

How is Iran treating dual nationals?

Iran is holding over a dozen Western passport holders, mostly dual nationals, in what rights groups condemn as a policy of hostage-taking aimed at winning concessions from foreign powers.

British-Iranian dual national Nazanin Zaghari-Ratcliffe, who was detained in Iran in 2016, was sentenced this week to another year in prison, prompting an angry reaction from the British government. A United Nations panel has described "an emerging pattern involving the arbitrary deprivation of liberty of dual nationals" in Iran.

Tehran insists that all those held have been subject to proper judicial process. But it has also not ruled out exchanges for prisoners held in the West.

Human rights groups have long accused Iran of holding dual-nationals as bargaining chips for money or influence in negotiations with the West.