Iran has sentenced a UK-Iranian woman to another year in prison — after she already served 5 years for alleged spying. Nazanin Zaghari-Ratcliffe's supporters say Tehran is using her as collateral in a financial dispute. 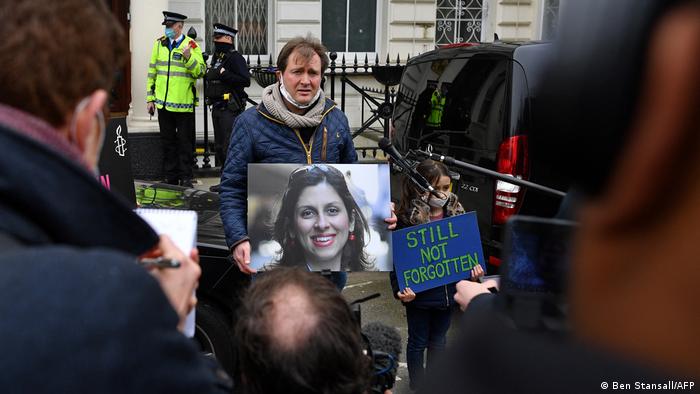 Richard Ratcliffe, husband of Nazanin Zaghari-Ratcliffe, and their daughter have been staging protests in front of the Iranian embassy in London

The sentencing of Zaghari-Ratcliffe comes as Iran holds talks about its fragile nuclear deal with world powers.

What reason was given for the sentence?

The 43-year-old aid worker's lawyer said she has been sentenced to a one-year jail term and banned from leaving the country for a year.

The sentence was on a new charge of spreading "propaganda against the system."

Her legal team says the sentence relates to her participation in a protest in front of the Iranian Embassy in London in 2009.

Zaghari-Ratcliffe was released from house arrest last month at the end of a five-year sentence for allegedly spying and plotting to overthrow the clerical establishment.

She was allowed to leave prison on furlough in March last year because of the COVID-19 pandemic, being required to stay at her parents' Tehran home since then.

"We continue to call on Iran to release Nazanin immediately so she can return to her family in the UK," Raab said.

Zaghari-Ratcliffe's husband Richard Ratcliffe said the decision was a bad sign and "clearly a negotiating tactic" by the Iranian authorities.

A remote psychological evaluation found that Zaghari-Ratcliffe has been suffering from "serious and chronic post-traumatic stress disorder, major depression and obsessive-compulsive disorder."

She has spent long periods in solitary confinement, and has physical problems that include neck, shoulder and arm pain.

The rights group Redress says the former detainee's mental health problems are "due to her treatment in prison and under house arrest," as well as legal uncertainty and separation from her family.

Decades-old row between London and Tehran

The latest twist comes as the UK and Iran negotiate a long-running dispute over a 400-million-pound ($530-million) debt that London owes to Tehran.

The late Iranian Shah Mohammad Reza Pahlavi paid the sum before the 1979 Islamic Revolution for Chieftain tanks that were never delivered.

Zaghari-Ratcliffe's family and their supporters claim she is being used as a pawn in the decades-long financial dispute. Iran denies any connection.

Human rights groups have long accused Iran of holding dual-nationals as bargaining chips for money or influence in negotiations with the West.

A United Nations panel has described "an emerging pattern involving the arbitrary deprivation of liberty of dual nationals" in Iran.

Iran is also accused of using the case as leverage in talks over the 2015 nuclear deal, which the US quit in 2018, between Iran and world powers including Britain.

A year after Donald Trump pulled the US from the international nuclear accord with Iran, the Middle East nation announced it would no longer adhere to some "voluntary commitments" in the accord.

The British-Iranian aid worker has called for the release of all "unjustly detained" prisoners in Iran as she spoke publicly for the first time since her return to the UK.