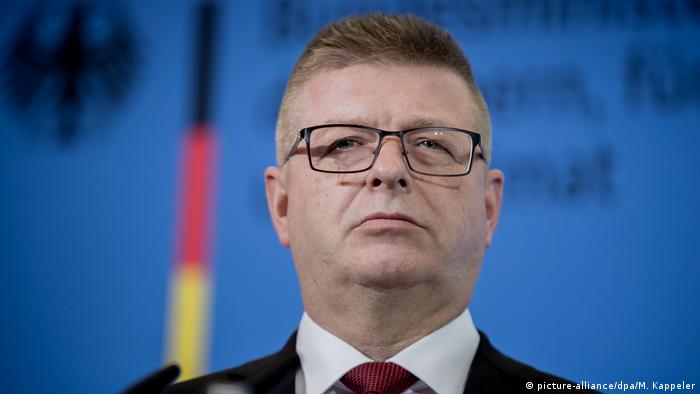 Haldenwang told the Süddeutsche Zeitung (SZ) Friday that extra "resources" from the government would enable him to enlarge his Department Two, which is responsible for tracking right-wing extremists inside Germany.

The department's ranks would be boosted by 50 percent in 2019, Haldenwang outlined, while refusing to confirm the SZ interviewers' follow-up question that this would mean an increase from 200 to 300 personnel.

"On numbers, I won't comment. They are secret," replied Haldenwang. "But my goal for the department on right-wing extremism is that it approach [the size] of our largest department that works on Islamist terrorism."

The jurist, previously deputy head of the Cologne-based Federal Office for the Protection of the Constitution (BfV), last month replaced Hans-Georg Maassen amid a row over Maassen's allegedly lax stance toward the far-right in the wake of Germany's investigative debacle over the NSU murder series.

Haldenwang, who declined Friday to criticize his predecessor, beyond speaking of the "Maassen affair," said August's anti-foreigner unrest in Chemnitz, the third largest city in Germany's eastern state of Saxony, had shown a "new dynamic in right-wing extremism."

A so-called "trigger event, in this case the death of a German man" was followed by a "mobilization" in which hundreds of right-wing extremists from across Germany came together, Haldenwang said, adding that such groups had become "connectable for normal protester citizens."

"I found especially shocking scenes in which men who exhibited the Hitler salute were applauded by [members of] the public from the curbside," Haldenwang said.

Across Germany, the federal BfV agency now counted "24,000 right-wing extremists - and rising," said Haldenwang. "More than half of them are violence-orientated."

Asked by the SZ about the far-right populist AfD party and its election since 2014 to German regional and federal parliaments, Haldenwang replied: "When a party in the German Bundestag repeatedly and loudly fuels this debate (on refugees and migrants), then this can also contribute to right-wing extremism finding new supporters."

Haldenwang said his federal office was "carefully examining" more than 1,000 pages of material sent by Germany's 16 states about the AfD's organizational branches and would decide in January on its legal recommendations - within postwar federal precepts overseen by Germany's Constitutional Court.

"What we in the end deliver must be juridically watertight. Nothing would be worse than it we made a decision that was [later] quashed from some or other court," he warned. "Our task is to protect democracy in that we observe extremist movements that endanger this democracy," Haldenwang said.

Police registered dozens of criminal offenses and infractions at Germany's largest neo-Nazi rock concert. Opponents were disappointed that the courts did not stop the event going ahead. (10.06.2018)