German infantry's role in Holocaust to be added to war memorial

Litigation by three Holocaust survivors has swayed Germany's northern city of Lüneberg to add wording to a controversial war memorial. It spells out the former Wehrmacht division was involved in genocide. 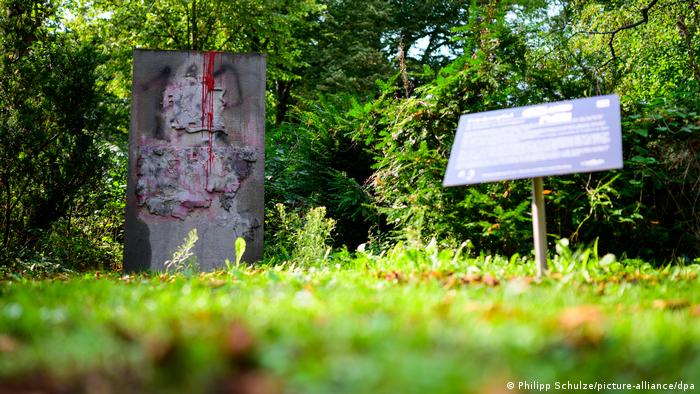 The court case brought by elderly Holocaust survivors before Lüneburg's Adminstrative Court ended Wednesday with the city agreeing to add wording to its explanatory plaque located next the often-smeared infantry monument.

It will spell out that the former 110th Infantry Division, created in the northern German city for Hitler's 1941 invasion of the Soviet Union, was "thus also involved in the genocide of Jews during the Shoah in the Soviet Union from 1941 to 1944," court spokeswoman Ines Mayer-Albrecht told DW.

The complainants had originally demanded — back in 2017 — that the memorial, erected by Wehrmacht veterans in 1960, be covered with a shroud.

Read more: How WWII affects the grandchildren of the war generation

In recent years it has often been defaced. Placed a few meters away is a city notice board elaborating on the former division that was decimated by Soviet forces near Minsk in July 1944.

One of the complainants, a Holocaust survivor living in Budapest, had spotted the infantry memorial in 2015 while attending the Lüneburg trial of Oskar Gröning as a joint plaintiff.

Gröning, notoriously called Auschwitz's "bookkeeper," was convicted in 2015 of having been an accessory to the murders of 300,000 people.

Lüneburg in Lower Saxony state was also where in late-1945 a British military court tried 45 personnel of the Bergen-Belsen concentration camp, where at least 52,000 neglected prisoners died of hunger and disease, including Anne Frank.

That trial ended in 11 being sentenced to death, including Bergen-Belsen's former camp commander Josef Kramer, with the site (70 kilometers, 43 miles southwest of Lüneberg) subsequently becoming a memorial for its victims.