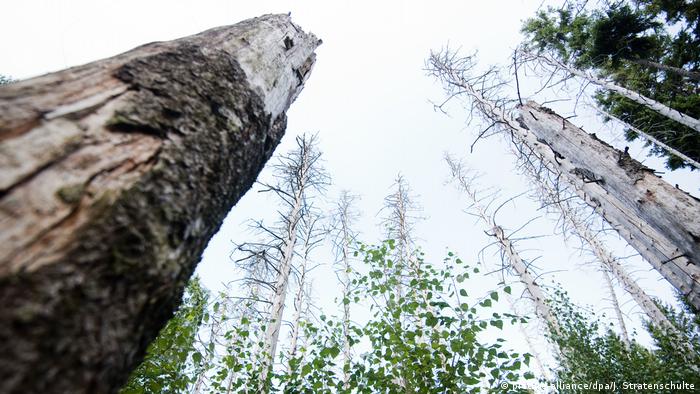 Germany's forests were spared the flames, but have been suffering from bark beetle plagues, among other things

In 2018, German forests burnt at around four times the rate they had in previous years, especially in the northern state of Brandenburg. But wildfires are not the problem for monoculture spruce conifer forests that dominate the wooded area covering one-third of Germany. These forests are instead falling victim to bark beetle plagues thriving in the dryer and hotter weather induced by global heating.

Germany's second national forest summit, appropriately titled "Waldsterben 2.0" (Forest Dieback), explores how to manage the German woods back to health in the midst of a climate crisis. Here are three suggestions that are on the table.

One of the key themes at the second national forest summit being hosted at the Wohlleben Forest Academy in western Germany is forest restructuring and ecological forest management.

German woods have almost no old growth, and very little biodiversity. That makes them extremely vulnerable to climate change. This is due to poor forest management, say some of the experts attending the summit.

The prime target for reformation is "artificial" conifer forests that were largely planted after the war because they were fast-growing and could provide wood for reconstruction. Making up 25% of German forests today, the predominant spruce tree is an Alpine species that requires wet and cold conditions. Now they are badly struggling in non-native areas as they age, a process exacerbated by climate change.

"Our forests are not natural forests," said Christopher Reyer, a researcher at the Potsdam Institute for Climate Impact Research and national forest summit participant.

Planted with very few other species, and containing very little biodiversity, these historical forest management "legacy effects" are being compounded by "unprecedented climate impacts on these types of trees," Reyer told DW.

Peter Wohlleben, forester, founder of the Wohlleben Forest Academy, and author of the bestseller, The Hidden Life of Trees, said that 50% or more of German forests could die in the next decade "because of bad management."

"My suggestion is to leave the forest alone," he said. "Natural forests can create their own local climate, whereas plantations get drier and hotter and cause their own problems," he added.

Climate impacts on forests are compounded by invasive timber harvesting, which also compacts the soil and limits its ability to retain water. On the first day of the summit, Wohlleben described a healthy native beech forest very close to his academy which had virtually no water runoff during the heavy rains that flooded nearby regions.

But the problem is not going away due to the huge export demand for German timber, with much of the harvested wood sent to China and the US for construction, notes Judith Reise, a researcher at Germany's Oeko-Institut. Meanwhile, "the timber is now missing for the national market or it is very expensive, which is a huge problem for local timber construction businesses," she added.

"Timber harvesting is not ecologically sustainable when too much timber is removed at once," noted Reise. She added that removing all the dead and fallen wood from forests, especially after a storm or bark beetle-induced die-off, is also limiting biodiversity because these trees can be beneficial for the regeneration of the forests and can still provide essential habitat for species.

Leaving forest undergrowth to build up for the sake of biodiversity might increase fire risk in the short term. But the nurturing of old growth will ultimately increase the climate resilience of all forests, especially in terms of remaining cool and wet.

"Don't harvest trees that have biodiversity attached to them," suggested Sebastian Kirppu, a Swedish forest conservationist, during the summit.

Kirppu said that in terms of biodiversity, forests in "Europe and Russia are the worst in the world."

He added that Red Listed species in these forests has increased significantly in recent years. In spite of sustainable forest certification for timber products, very few species are coming off the list, and more and more are being added.

"Biodiversity protection must be the basis for whatever we do," said Judith Reise. But so far only 2.8% of German forests are protected for biodiversity, well short of a 2020 target of 5%.

3. Using wood in a sustainable way

There are no easy solutions to Germany's forest crisis. While conservationists are calling for the forests to be left alone, low carbon timber products can also help fight global heating — especially as an alternative to CO2-heavy construction materials like steel and concrete.

"It's not that harvesting is always bad," he added, even if he agrees there should be less timber cutting, and that there should be more protected old growth. "But compared to all the other land uses, forestry is an area where we can have a quite a natural ecosystem and still create useful products."

The issue of forest use and design will be one of the key issues at the forest summit when deciding how to spend the €1.5 billion ($1.8 billion) promised by the federal government in February to support public and private forest owners to initiate more bio-diverse reforestation, among other measures.

One strategy, as a forester from Lübeck in northern Germany said at the summit, will be to shift from clear-felling to single-tree cutting to create "an ecological system in forestry."

Whatever the solutions, they will need to holistically encompass German forest health, climate resilience and productivity.

Why are forests so valuable?

As Amazon rainforest is decimated by widespread fires and logging, we can look to a long German tradition of burning and clearing woodlands — and solutions that have included systematic replanting and forest management.

Germany’s parched forests are nearing ecological collapse, foresters and researchers warn. More than 1 million established trees have died since 2018 as a result of drought, winter storms and bark beetle plagues.

The health of German forests is in terminal decline. Global heating and poor management are at the roots of a countrywide die-off, an urgent issue being confronted by a national forest summit this week.