German Foreign Minister Guido Westerwelle has arrived in Belgrade for talks with Serbia's leadership. Westerwelle called on Serbia to implement a deal normalizing relations with its former province Kosovo. 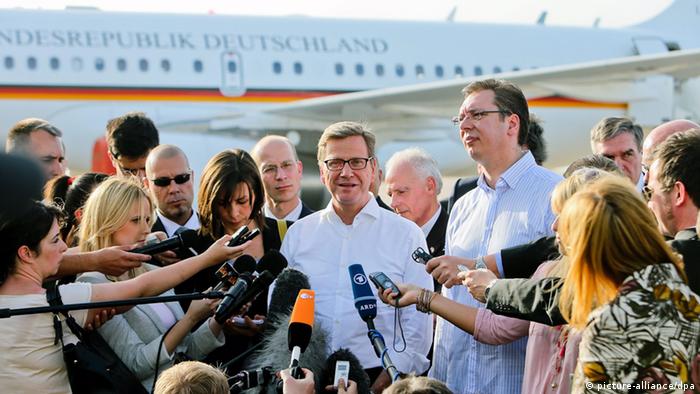 The German foreign minister is scheduled to meet with Serbian President Tomislav Nikolic, Prime Minister Ivica Dacic and Foreign Minister Ivan Mrkic on Monday for talks on the Balkan nation's future ties with the European Union.

Serbia signed a historic deal normalizing relations with Kosovo in Brussels last April. The deal would expand Pristina's authority to northern Kosovo, while giving a degree of autonomy in the area to 40,000 local Serbs who are largely opposed to the deal.

"An agreement on the implementation of the Brussels agreement and the start of its realization is a key condition for Serbia's further progress on its European path," Westerwelle said after arriving in Belgrade on Sunday.

The Serbian government hopes that the deal with Kosovo will bring Serbia closer to joining the EU and attract Western investment.

Deputy Prime Minister Aleksandar Vucic (pictured on right with Westerwelle) said on Sunday that he hoped negotiations with the EU would begin in June. Vucic went on to say that he expected "a lot more investment" from Germany as a consequence of the deal.

Strains between Belgrade and Pristina

Kosovo broke away from Serbia in 1999, after NATO bombed Serb forces out of the region in an effort to stop alleged war crimes against ethnic Albanians. In 2008, Kosovo officially declared its independence from Serbia. But Belgrade still refuses to recognize Pristina's sovereignty.

Croatia, which was among six republics in former Yugoslavia before its violent breakup in 1991, is set to join the European bloc on July 1. Serbia, Montenegro, Bosnia and Macedonia are on different stages of intended accession to the EU.