An agreement between the leaders of Serbia and Kosovo has been hailed as a historic step forward in putting conflict in the region to rest. Now everything hinges whether the deal can be implemented. 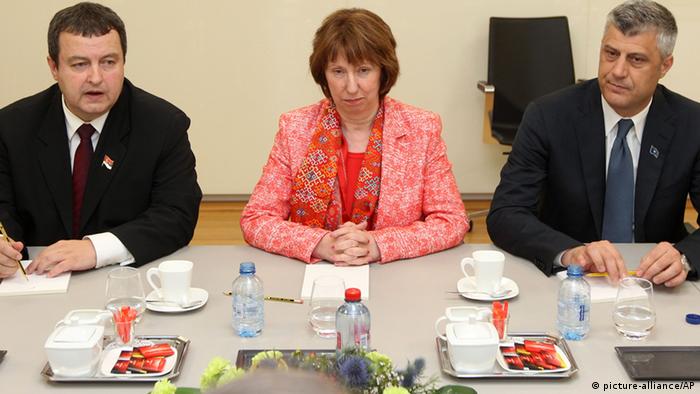 "They were relieved, but neither of the two prime ministers was truly able to celebrate." That was the opinion shared by the large majority of Kosovar and Serbian journalists in Brussels, after Serbian Prime Minister Ivica Dacic and his Kosovar counterpart, Hashim Thaci, announced the agreement on the normalization of relations between Serbia and Kosovo.

"This is a first and historic agreement between Serbia and Kosovo," Thaci said. "Serbia has recognized the full sovereignty and territorial integrity of Kosovo. This is the start of normalizing the relationship between our two countries."

Dacic, however, wasn't quite as enthusiastic: "That's the best suggestion we received in this dialog. My signature doesn't mean, however, that we accepted this document."

The governments in Belgrade and Pristina have until Monday (22.04.2013) to send an official answer to EU foreign affairs chief Catherine Ashton. But after the initial reactions from both countries, it is already clear that the agreement, which was reached with Ashton's help, is supported by majorities in Serbia and Kosovo. 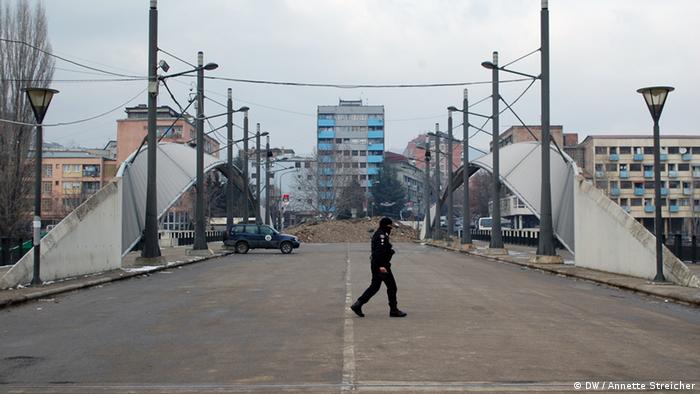 The barricades at the bridge of the Kosovar city Mitrovica are a symbol for how divided the country still is.

Kosovar President Atifete Jahjaga said the deal will contribute to "peace and stability in the relationship between Serbia and Kosovo, and in the entire region." There was also support for the agreement among the opposition, with the Alliance for the Future of Kosovo, headed by former Prime Minister Ramush Haradinaj, coming out in favor of it. That gives the treaty a comfortable majority in the Kosovar parliament.

But the two largest opposition parties, the Democratic League of Kosovo and the extremist movement "Vetevendosje" (Self-Determination) called the agreement "national treason and the foundation for a new Serbian republic on the Balkan peninsula, just like the Srpska Republic in Bosnia and Herzegovina." They announced protests and demonstrations against the agreement.

The reason: the 15-point-treaty says that the four northern provinces of Kosovo, populated almost exclusively by Serbs, are to form one large community. This region will then receive broad rights and authority in issues pertaining to police, justice, education, health care and culture.

This Serbian community in Kosovo will still be financed by Pristina. The agreement also states that police and courts in the northern region must be part of the Kosovar judicial system. This fact can be regarded by opponents of the Serbian government as "recognition of the Kosovar state," according to former Serbian Prime Minister Vojislav Kostunica and his party, the Democratic Party of Serbia.

Opponents of the deal in Serbia say the treaty is a "betrayal of Serbian interests in Kosovo." Other nationalist parties in Serbia, as well as the majority of Serbs in the northern Kosovar regions, agreed with this view and have also announced protests and demonstrations. Still, the agreement enjoys major support among lawmakers in Serbia.

Resistance from Serbs in Kosovo

Analysts in Belgrade and Pristina think there will be challenges in putting the agreement into action, mainly because of the resistance of Serbs in Kosovo's north. 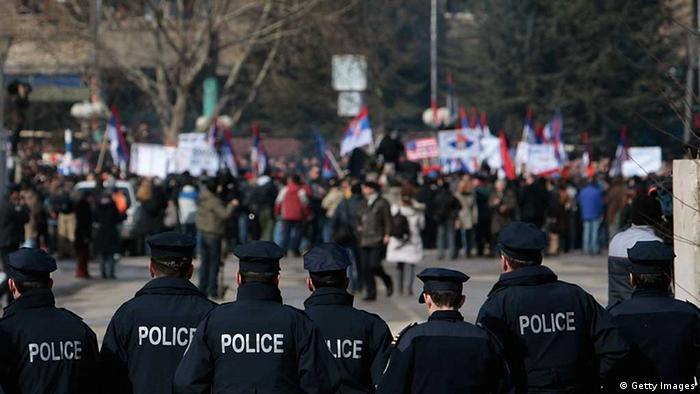 Opponents have already anounced they'll protest the agreement. Here, Serbs are protesting in Mitrovica in 2008.

"The NATO-led KFOR [peacekeeping] mission, Eulex [the EU's police mission to Kosovo] and the Kosovar government will be responsible for supporting the agreement," Thaci said. "We also expect facilitating measures from Serbia."

The parties to the agreement will found a "Commission for Treaty Implementation" in Brussels by April 26.

At the end of negotiations, another contentious issue was resolved as well. Both parties agreed that they will not "hinder or disturb each other in the process of approaching the European Union."

For the Kosovar government, this perpetuates hope of further recognition for the country. Roughly 100 countries have recognized Kosovo, including 22 of the 27 EU members. The government now hopes that Spain, Greece, Rumania, Slovakia and Cyprus will also recognize Europe's newest country.

Commentary: The most expensive Serbian word

After months of negotiations and 14 years after the war, Kosovo and Serbia intend to normalize relations. But the agreement between Serbia and Kosovo is only a first step, writes Dragoslav Dedovic. (20.04.2013)

Under pressure from the EU, Serbia and Kosovo have agreed to a normalization of relations, although not to diplomatic ties. But even so, many hurdles remain on the path toward Europe. (20.04.2013)