Germany's gay foreign minister, Guido Westerwelle, has formalized his relationship with his partner. Though Germany does not recognize gay marriage, same-sex couples can enter "registered partnerships." 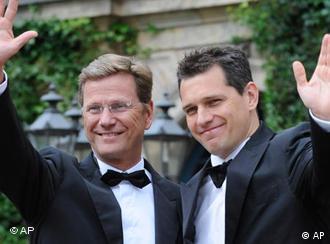 Westerwelle and Mronz have been together since 2003

According to the paper the marriage was pronounced by the mayor of Bonn, with only close family members and friends present.

A spokesman for the Free Democrats, Merkel's junior coalition partner of which Westerwelle is the head, confirmed the report but did not comment any further, adding that the two men "wish to keep this a private affair."

In Germany, gay marriage is not officially recognized by the state, but since the Life Partnership Act of 2001 the country has granted "registered partnerships" for same-sex couples, which provide some but not all the rights of marriage.

Westerwelle, 48, has been together with 43-year-old Michael Mronz, a sporting events organizer, since 2003. He made his sexuality public a year later, during a dinner to celebrate Chancellor Merkel's 50th birthday.

The outspoken vice chancellor and foreign minister is one of several openly gay politicians in Germany, which include Berlin mayor Klaus Wowereit, of the opposition liberal Social Democrats, and former Hamburg mayor Ole von Beust, of Merkel's Christian Democrats.

Neither Wowereit nor von Beust have registered their respective relationship with the state.

Cologne is home to one of the largest and most active lesbian and gay communities in all of Germany. On Saturday, the city played host to thousands of visitors from around the world as the Gay Games opened in the city. (31.07.2010)