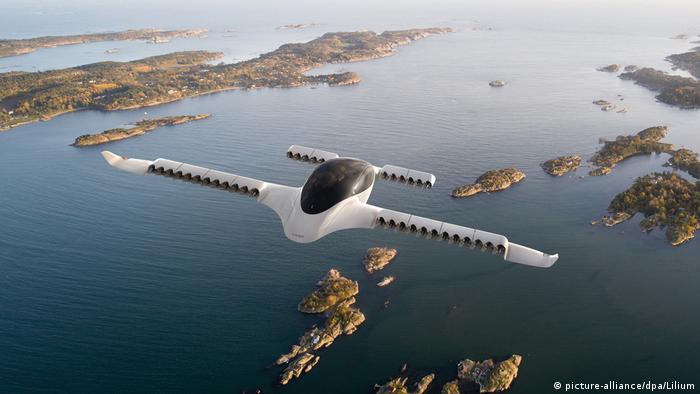 The German flying taxi startup Lilium has become a billion-dollar "unicorn" after attracting $35 million (€31 million) in funding from prominent tech investor Baillie Gifford, one of the UK's largest private fund managers, with stakes in Amazon, Tesla, Airbnb, Spotify and SpaceX.

With the latest funding, the Munich-based startup has attracted total investments of more than $375 million to date.

Here is a lowdown on the all-electric, vertical take-off and landing passenger aircraft that's attracting attention from influential investors.

The Lilium Jet, as the aircraft is called, is a five-seater passenger jet that can take off and land vertically. It is powered by 36 all-electric jet engines mounted on its flaps. The company says even if one engine fails the others would continue to function, making the aircraft safer.

The jet can travel up to 300 kilometers (186 miles) per hour on just one charge, which means one can fly from Manhattan in New York to JFK Airport — a distance of 22 kilometers — in just 6 minutes or from London to Liverpool in a single journey. The taxi would be flown by a pilot, but the company plans to make it autonomous in the future.

The German 'air taxi': A new era of transportation?

Lilium aims to shuttle people between cities or between suburbs and city centers, sparing them the pain of weaving through busy traffic. The startup claims the aircraft combined with "digital scheduling and smart operations" will be able to ferry passengers four times faster than a taxi and at affordable prices to boot.

The company plans to eventually roll out a taxi service, with consumers locating take-off spots and booking rides using an app. A 6-minute trip from Manhattan to JFK Airport is reported to cost about $70. By comparison, a ride-sharing helicopter service run by Uber on the same route costs $200 per passenger. Short-distance rides on Lilium jets would cost about the same as a trip with Uber or Lyft taxis.

The flying taxi created waves in May last year when it completed its maiden 60-second flight that saw the Lilium Jet complete a lift-off, hover and landing. The maiden test took place two years after the company completed flight testing for a two-seater prototype, which has since been transformed into the current five-seat variant. The aircraft has completed over 100 tests to date.

The tests have seen the jet fly at speeds exceeding 100 kilometer per hour and climb and descend vertically at rates of 500 feet per minute. Lilium expects the jet to begin commercial services in 2025.

Lilium was founded in 2015 by four friends — Daniel Wiegand (the current CEO), Sebastian Born, Matthias Meiner and Patrick Nathen — from the Technical University of Munich. The company, which currently employs more than 450 people, counts Atomico, Tencent and Freigeist among its prominent shareholders.

Lilium is among a host of companies developing flying cars to help transform how people commute in big cities. Morgan Stanley says market for autonomous aircraft could be worth $1.5 trillion by 2040. Uber unveiled its giant-drone like flying taxi prototype in 2018 and plans to launch the taxis commercially in the next five years. German startup Volocopter, backed by Mercedes Benz-maker Daimler and Intel, plans to launch its own air taxi service in Singapore by 2021.

Flying taxis are set to soar over Ingolstadt, Germany, as part of a project backed by the German government, Audi and Airbus. Hamburg is also working on incorporating drones as a mode of transport. (21.06.2018)