Firefighters in the city of Dortmund were called upon to help a red squirrel in need of rescue. But with its head firmly stuck in the manhole cover, rescuers had to get creative in order to free the distressed animal. 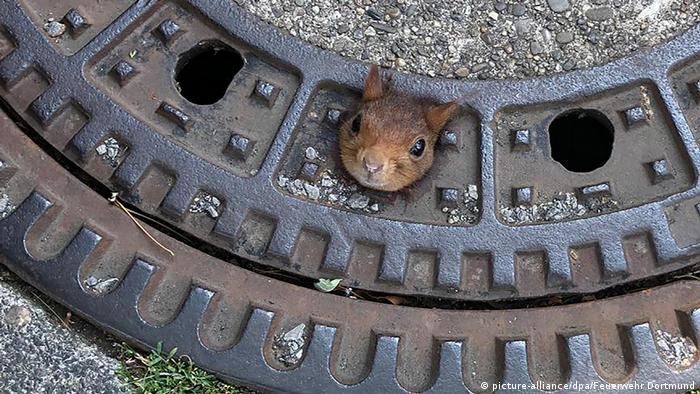 A squirrel trying to get out of a sewer system in the western German city of Dortmund found itself in a sticky situation on Thursday morning.

Dortmund firefighters were alerted to the distressed animal around 10:30 a.m. local time, authorities said in a statement.

After several attempts to free the squirrel on site failed, firefighters had to get creative.

The team ended up removing the entire manhole cover — with the squirrel still stuck inside — and took it to a veterinary office.

The veterinary team was able to safely remove the squirrel from the manhole cover after sedating the critter.

According to firefighters, the squirrel sustained "minor injuries" on its neck and will remain in the veterinary office to receive further treatment.

In February, firefighters in the German town of Bensheim freed a sewer rat from a similar predicament. The rat had a little too much "winter fat" and was stuck as well in a manhole cover, but was able to be pushed through.

Veterinarians have dismissed criticism that the Arabian mare poses a danger to herself and others during her morning walks. Despite dozens of calls from worried pedestrians, police say they've never had to intervene. (09.03.2019)

Baby squirrel who captivated Germany is safe — and female

"Pippilotta" stole the headlines last week after following a man "relentlessly" through the streets of Karlsruhe. According to animal control officers, this is common for squirrels who have lost their mothers. (13.08.2018)