Rescuers said the little critter put on a little too much "winter fat" and got stuck in one of the holes in the manhole cover. Several firefighters were called to the scene and were able to free the distressed rodent. 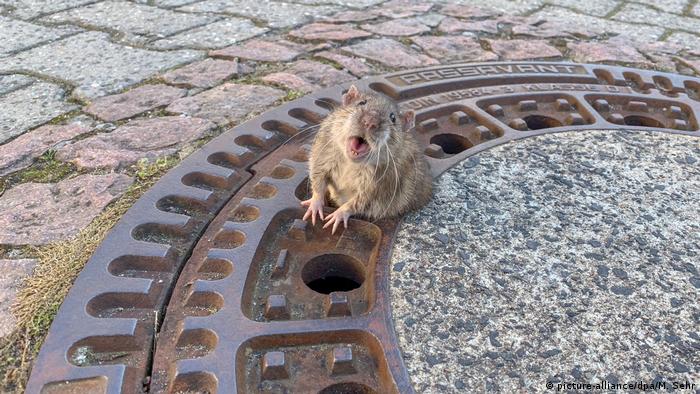 The story of one town's efforts to save a rat has warmed the hearts of animal lovers across Germany.

A male sewer rat described as having too much "Winterspeck" — which literally translates to "winter bacon" or "winter fat" — found himself in a tricky situation over the weekend.

The rat attempted to crawl out of a manhole cover in the German town of Bensheim on Sunday, but got lodged in one of the holes.

"The rat had quite a lot of winter fat and got stuck on its hips — nothing was going forward and nothing back," animal rescuer Michael Sehr told news agency DPA on Monday.

An animal rescuer with the "Berufstierrettung Rhein Neckar" made an unsuccessful attempt to free the distressed rodent, but ended up calling for backup from the local volunteer fire department in Auerbach, located some 30 kilometers (19 miles) north of Mannheim.

The team of around eight firefighters managed to lift up the heavy manhole cover and the rescuers were able to safely push the rat through the hole. The rat was reportedly unharmed.

"The animal was subsequently released again into the wild. The fire department's operation was completed after a good 25 minutes," the Auerbach fire department said in a statement.

The animal rescue group "Berufstierrettung Rhein Neckar" posted pictures of the rescue on Facebook, prompting thousands of reactions on the social media platform and hundreds of comments.

Many praised the actions of the rescuers and fire department, with one user writing: "I think it's great — every creature deserves to be helped."

Other Facebook users pointed out that the move to save the rat seems to run contrary to efforts in other German cities to exterminate the rodents. The western German city of Dortmund has started a campaign to reduce its rat population by placing poisoned bait in the sewers.

Animal rescuer Michael Sehr told news agency DPA that he didn't see a contradiction with saving the rat in Bensheim.

"Even animals that are hated by many people deserve respect," he said.

Thousands petition to move 'bullied' ape Bili out of Germany

The petitioners are calling on a German zoo to move to the UK a bonobo ape who they say is being bullied by others. The zoo has refuted their claims, saying aggression against a male ape is common during integration. (13.02.2019)