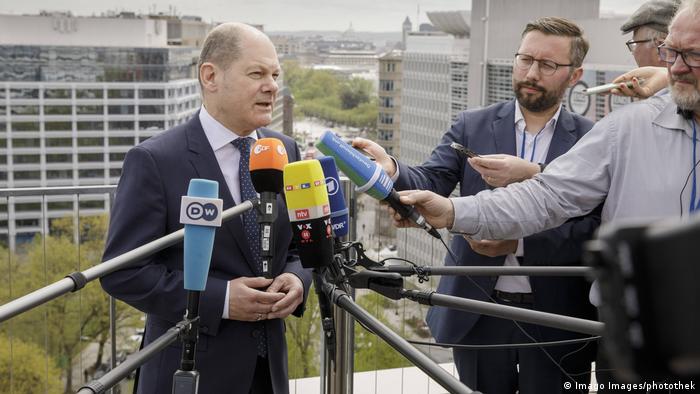 Germany has a "very expansive investment strategy" that is helping to stimulate the global economy, German Finance Minister Olaf Scholz said on the sidelines of the IMF and World Bank spring meetings in Washington on Friday, adding that "politically produced" risks had instead caused global uncertainty.

"We have already done what everybody asked of us," he said, citing recent budgetary increases for Germany's public infrastructure, its education sector and digitalization projects.

As risks, he cited trade disputes, including US spats with China and Europe, as well as Brexit, which on Wednesday saw the United Kingdom and the European Union agree to a further delay until October.

Poul Thomsen, the head of the IMF's European Department, cited Germany's large trade surplus and sluggish wage increases as problematic, telling reporters in Washington that Berlin could do more, given its fiscal strength and the eurozone's low interest rates.

Friday's contradictory remarks coincided with a call in Washington by leading officials from Japan, who currently chairs the Group of 20 (G20) economic nations, for "timely policy action" and a return to multilateral global cooperation.

Scholz, a Social Democrat (SPD) who also serves as vice-chancellor in Chancellor Angela Merkel's grand coalition Cabinet, said Berlin was sticking to its practice of balancing the federal budget in recent years, a policy known in German as the schwarze Null (black zero).

Read more: Billions to be injected into German rail network

Referring to an IMF forecast of only 0.8% economic growth in Germany this year compared to 1.5% in 2018, Scholz insisted: "We are not in a recession."

Instead, Germany was merely experiencing slower growth, and there were signs that its economy would pick up at the end of this year, Scholz said, adding that Germany's shortage of skilled workers was not a typical warning sign for an imminent recession.

German Bundesbank President Jens Weidmann, who accompanied Scholz in Washington, said the slowdown was a "dent" caused by a cooling of the world economy. He added that for Germany, "the economic picture is not one of a dramatic downturn that would now require stimulus packages."

Acknowledging lingering US demands that Germany boost its defense spending, Scholz said that compared with 2017, Berlin had raised its defense budget by more than 15%.

"We know that Germany has to do more," she conceded, but added that by 2024, Germany's military budget would equate to 1.5 percent of its GDP.

In 2014, NATO nations agreed to a target of 2% of GDP for defense spending.

A new survey has shown that a majority of Germans support the role of NATO, but not the alliance's defense spending target. From Brexit to European elections, DW examines the survey's findings. (04.04.2019)

Ukrainian President Volodymyr Zelenskyy said Russia wants to "destroy everyone who is there in Mariupol." The EU says it is working on the next wave of sanctions against Russia. Follow DW for the latest.