Only 1 percent growth is forecast for Germany this year, according to Economy Minister Peter Altmaier, who attributed the risks to Brexit and global trade rows. Previously, Berlin had reckoned on 1.8 percent. 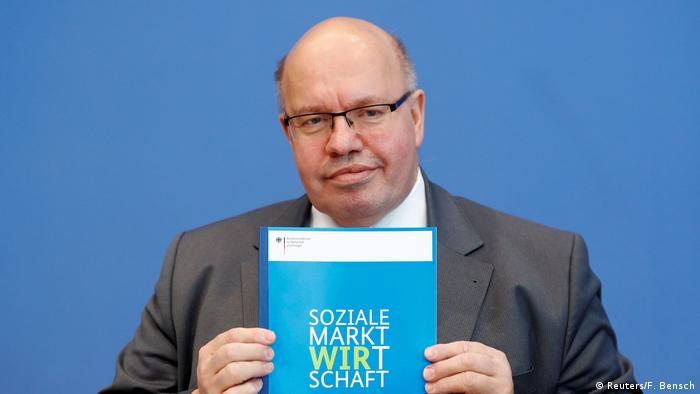 Germany heads into 2019 facing its lowest economic growth since 2013, Altmaier said on Wednesday while presenting his report on the past year's economic trends (pictured above).

Europe's largest economy grew 1.5 percent in 2018, according to an initial estimate supplied by the Federal Statistics Office in Wiesbaden.

Looking ahead, Altmaier said the risks had risen primarily in what he described as the "external economic field," such as an uncertain Brexit outcome and trade conflicts — especially with the United States.

On Brexit, Altmaier said he was deeply worried that a British exit from the EU at the end of March would lead to "considerable economic policy distortions." Berlin must do everything in the coming days to help avoid an unregulated Brexit, he added.

No grounds for panic

The former Christian Democrat (CDU) chief of Angela Merkel's chancellery turned Economy Minister said, however, he saw no grounds for German panic and again hinted that he would seek tax cuts to relieve employees and businesses.

"The German economy is on course for growth this year as well, the 10th year in a row," said Altmaier. "This is the longest upswing phase since 1966." 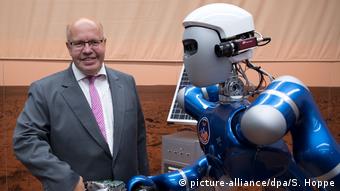 "The good years can continue, when we behave wisely and carefully," he said, adding that he wanted legislation to accelerate investments coupled with tax-based research incentives for firms — already decided by Merkel's coalition.

On the labor market, the report remained upbeat, forecasting an easing in unemployment to 4.9 percent, compared to 5.2 percent over the past year. Germany's combined workforce of company- or state-employed and self-employed looks set to climb to 45.2 million.

Private incomes in terms of wages and salaries could rise by 4.8 percent during 2019, the report's authors predicted.

Self-employed make up about 10 percent of Germany's total workforce, with the highest levels in Berlin and Hamburg.

Gustav Horn, director of the trade union-affiliated Institute for Macroeconomics and  Economic Research (IMK) attached to the Hans Böckler Institute based in Düsseldorf described the government's rhetoric as "calculated pessimism."

"Because it [the government] will say in the course of this year that all things have turned out much better than initially expected, thanks in particular to its efforts in a difficult foreign trading environment."

Germany's public debt, currently about 61 percent of Gross Domestic Product (GDP) should during 2019 fall below the 60-percent maximum set by the EU in its Maastricht Treaty, said Altmaier.

Germany ranks in middle field, with Greece and Italy having the highest comparative levels of public debt.