It is in the "security interests of Germany" to act in Syria, Annegret Kramp-Karrenbauer told DW. While she reportedly received Angela Merkel's signoff, her proposal caught other government politicians off guard.

In an interview with DW on Monday evening, Germany's Defense Minister Annegret Kramp-Karrenbauer advocated for the establishment of an internationally controlled security zone in Syria in cooperation with European partners, as well as Turkey and Russia.

The proposal has the potential to lead to German and European military deployment to the region, marking an escalation of involvement in the Syrian conflict as it enters its ninth year.

"This security zone would seek to resume the fight against terror and against the 'Islamic State,' which has currently come to a standstill," she said. "It would also ensure that we stabilize the region so that rebuilding civilian life is once again possible, and so that those who have fled can also return voluntarily." 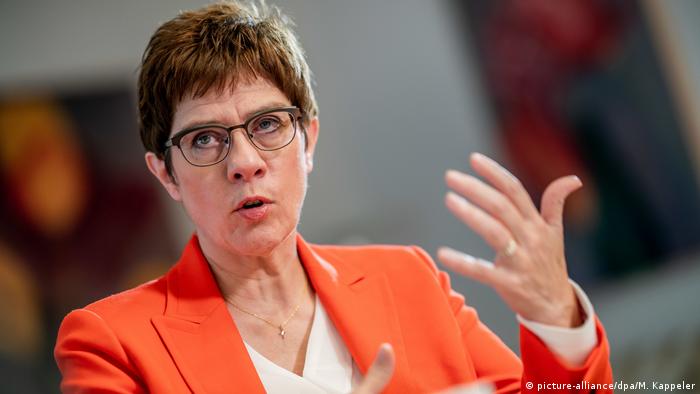 Europe must 'come up with our own recommendations and initiate discussions'

The defense minister, who is also the leader of Germany's conservative Christian Democrats (CDU), added that longtime chancellor and fellow party member, Angela Merkel, had already been informed of the recommendation, and that she has the backing of defense and foreign policy experts within her own party.

However, her announcement drew criticism from the CDU's coalition partner, the center-left Social Democrats (SPD).

German media reports indicate that Foreign Minister Maas, a ranking member of the SPD in the government coalition, had only received news of the proposal via text message shortly before the announcement Monday evening.

Other high-level members of the SPD reported they were caught off guard by the proposal for potential German military engagement abroad — a controversial topic — and were not involved in the formulation of such a proposal.

Katarina Barley, an SPD member of the European Parliament and the former German minister of family, youth, and women, told DW that "this proposition came as a complete surprise not only to us as parliamentarians but also to the foreign minister... this is not the way to introduce any kind of diplomatic or military mission.

Resume the fight against extremist terrorism

Kramp-Karrenbauer stressed that Europe and Germany have a strong imperative to take action in Syria.

"Europe cannot simply be an onlooker," she added. "We also have to come up with our own recommendations and initiate discussions."

The goal of the proposed security zone would be to resume the fight against Islamist terror, which has largely stalled since Turkey's offensive in northern Syria began on October 9 in the aftermath of a US troop withdrawal. The offensive targets the Kurdish YPG militia, a crucial faction within the Syrian Democratic Forces (SDF), the US-assisted coalition that fought against the "Islamic State."

Kramp-Karrenbauer called for concrete recommendations for a security zone to be worked out with NATO partners during a meeting of defense ministers on Thursday and Friday in Brussels.

Germany would also use its current nonpermanent seat on the UN Security Council to enter into bilateral talks with all parties involved in the conflict, the defense minister added.

Last week, German Chancellor Angela Merkel proposed a summit with France, the United Kingdom and Turkey to discuss the deteriorating situation in northern Syria. At least 160,000 civilians have been displaced since the October 9 incursion, according to the United Nations Office for the Coordination of Humanitarian Affairs.

"The idea of establishing a protective area is promising," Chancellor Merkel told German news agency dpa on Tuesday, adding that the plans would be discussed within the Cabinet.

Russia, Turkey to be included

Controversially, Kramp-Karrenbauer also underscored the need for Turkey and Russia to be actively included in any European-led discussions on the matter

"The alternative to that would be that the Europeans and NATO simply watch as talks between Turkey and Russia continue," she told DW.

"Russia is one of the most important actors in Syria," she added. "Regardless of whether one likes that or not, it is a fact that we have to deal with."

However, the former NATO general and ex-head of the German armed forces, Harald Kujat, told German broadcaster NDR that he would specifically oppose Turkey's involvement in such a security zone. 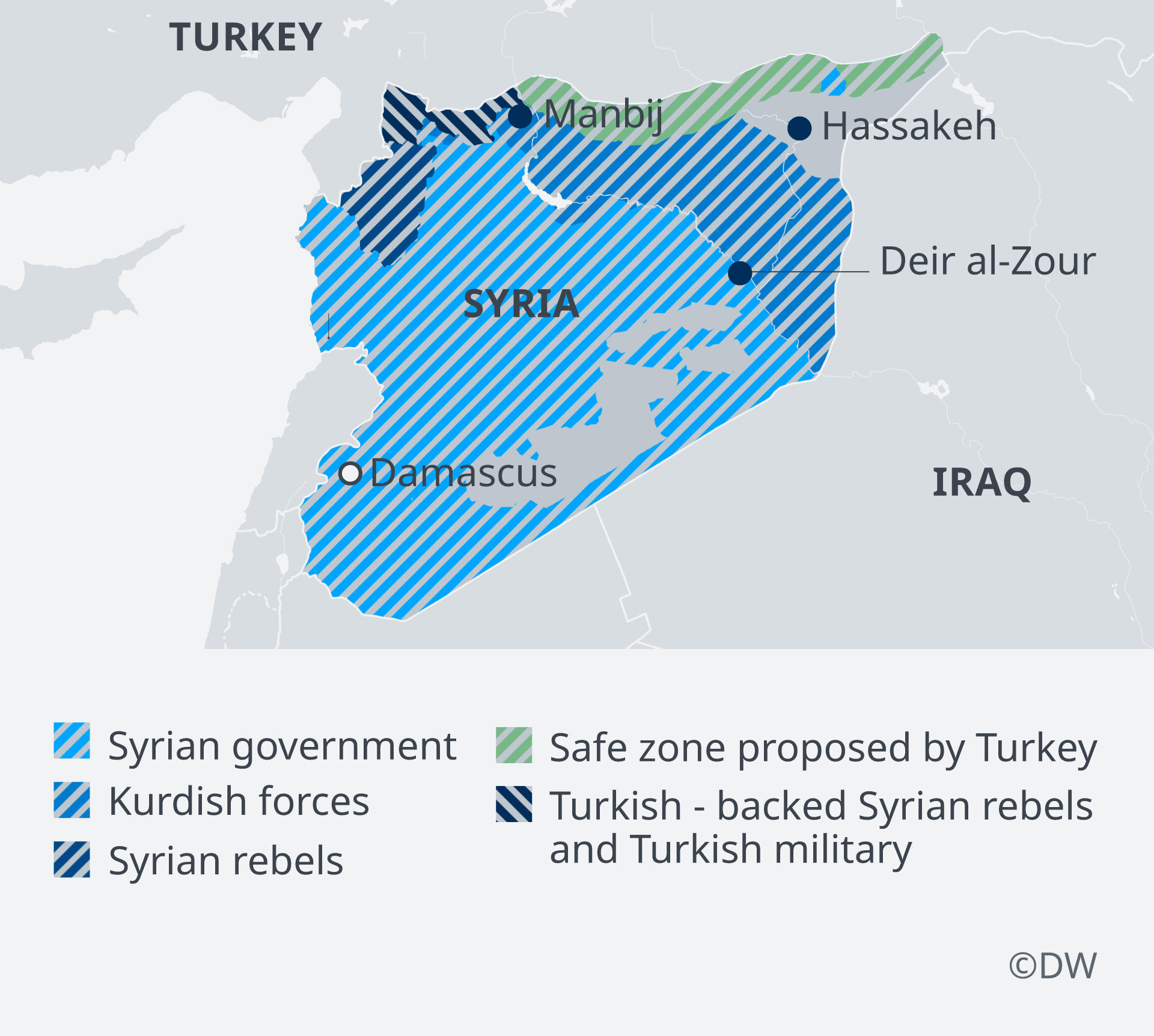 He said that Turkey is already in northern Syria under the auspices of establishing what it calls a "security zone." Kujat instead called for a NATO and European-led initiative to guarantee the protection of Kurds and other ethnic minorities in the region.

Even so, he expressed skepticism about whether such coordination between all parties involved is "feasible under the current conditions."

Meanwhile, the willingness of state partners with disparate views on the conflict to come to the negotiation table remains open.

"European friends should be thankful to our soldiers for doing this very dangerous but important work," Ibrahim Kalin, a spokesman for Turkish President Recep Tayyip Erdogan, told DW in an interview on Monday. He added that the cease-fire, slated to end on Tuesday, would not be extended unless all YPG units had left northern Syria. Turkey considers the YPG to be a terrorist organization and a security threat because it has ties to Turkish Kurds pushing against Ankara for greater autonomy.

Troops on the ground?

One particular concern is the extent to which such an internationally controlled security zone would involve the deployment of German troops, some of whom are already stationed in Mali and Afghanistan to aid in support and training of local troops there.

"It wasn’t coordinated with us, and I have multitude of questions," Fritz Felgentreu, the SPD's defense expert in Parliament, told German radio broadcaster Deutschlandkfunk.

"Such a security zone would mean the deployment of some 40,000 troops," he added. "Those 40,000 soldiers have to come from somewhere and the German armed forces are already at capacity with their many deployments."

Any international military deployment of German forces needs to be greenlighted by parliament.

MEP Katarina Barley also criticized this proposal in an interview with DW, saying that Kramp-Karrenbauer has not offered any details of what a German "boots on the ground" operation would look like. She said that she didn't think diplomacy should be abandoned so quickly.

"We have to enforce everything that is possible in a diplomatic way, in a humanitarian way. I don't think that the military option is the one to choose now," Barley said.

Washington and Ankara have agreed to a cease-fire in northern Syria, but the deal leaves a lot of questions unanswered. Experts say these will present hurdles on the way to establishing a safe zone. (18.10.2019)

Erdogan spokesman: Europeans 'should be thankful to our soldiers'

The Turkish and Russian presidents are meeting in Sochi as the five-day cease-fire expires. In a DW interview, Ibrahim Kalin spoke about his country's aims in the Syria conflict and what to expect from the meeting. (21.10.2019)