Emmanuel Macron says he, Boris Johnson and Angela Merkel will meet Recep Tayyip Erdogan within weeks — probably in London. The European Union has called for Turkey to withdraw troops from the Kurdish region in Syria. 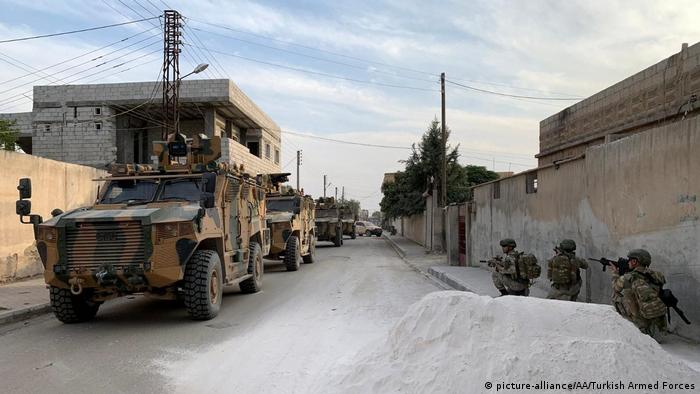 At the conclusion of the EU summit, French President Emmanuel Macron said he, German Chancellor Angela Merkel and British Prime Minister Boris Johnson would meet with Recep Tayyip Erdogan in the coming weeks — most likely in London. Macron called the offensive Turkey's unilateral military offensive against a Kurdish region in Syria "madness" and the North Atlantic Treaty Organization's failure to react to the assault a "serious mistake."

On Friday, EU leaders urged Erdogan to withdraw his troops.

The plea came after US Vice President Mike Pence, Erdogan and the commander of the Kurdish-led Syrian Democratic Forces (SDF) agreed to a five-day cease-fire in northeastern Syria.

In a joint statement, the 28 EU leaders said the military operation "causes unacceptable human suffering, undermines the fight against Da'esh and threatens heavily European security." Da'esh is an alternative name for the "Islamic State" terror group.

The pause in fighting will last 120 hours to allow Kurdish forces to move away from a "safe zone" along Turkey's border and allow for negotiations toward a permanent end to the conflict.

In their statement, EU officials acknowledged the cease-fire announcement, but again urged "Turkey to end its military action, to withdraw its forces and to respect international humanitarian law."

On Monday, the European Union had passed a resolution to limit arms sales to Turkey. Some countries, including Germany, have vowed not to deliver weapons to Turkey while the offensive is ongoing.

Chancellor Merkel continued to defend the European Union's refugee swap deal with Turkey after the summit on Friday. Merkel said the agreement was made because of the "humanity" of the people most affected: displaced people who would not have to risk the often deadly sea crossing from Turkey to the EU nation of Greece.

"We know how many people have died in the Aegean," Merkel said on Friday. "We know what anguish that has brought to me. And that is why it is our task to strike such arrangements."

Merkel said it remained important to criticize Turkey's violations of human rights, such as by imprisoning or otherwise silencing journalists. As relates to the offensive against the Kurdish region in northern Syria, Merkel said one could acknowledge the "definite security interests of Turkey," but also the immense suffering caused. She said she would remain in contact with Erdogan.

NATO member Turkey launched its military operation in northeastern Syria last week, targeting the US-backed SDF after the United States pulled out its troops from the area.

Turkish officials view the YPG, the main component of the SDF, as a terrorist group linked to the Kurdistan Workers' Party (PKK), which has fought a nearly four-decade war for Kurdish rights against the Turkish state.

Erdogan said he wanted to defeat the YPG and create a 32-kilometer-deep, 480-kilometer-long (20-mile by 300-mile) "safe zone" along the Syrian border to protect Turkey's security and provide room to resettle millions of Syrian refugees now in Turkey.

EU officials say the bloc "remains engaged in its efforts towards effectively addressing the serious humanitarian and refugee crisis in light of evolving needs."

US Vice President Mike Pence is traveling to Ankara to persuade President Recep Tayyip Erdogan to halt his military offensive in northeastern Syria. But Turkey has rejected calls for a truce. (16.10.2019)