The first round of the German Cup takes place this weekend, pitting some amateur sides against Bundesliga giants. While some matches will even be played in front of fans, others are being forced to break from tradition. 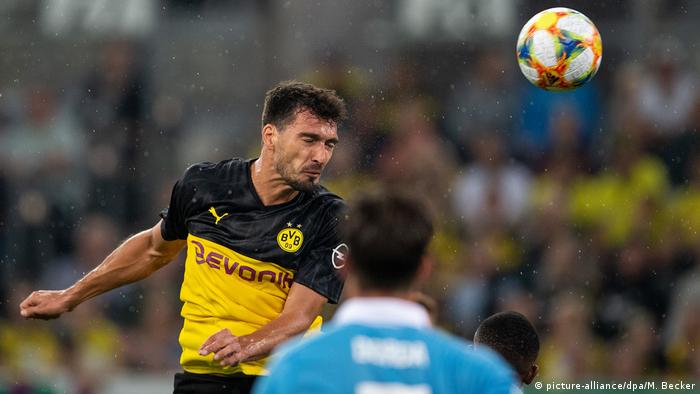 The first round of the German Cup typically pits semi-professional and amateur sides against Bundesliga giants such as Bayern Munich and Borussia Dortmund.

Traditionally, the lower-ranked side is automatically drawn at home, allowing them to welcome star names and give them the best chance of causing an historic cup upset in front of their own fans.

But with matches still taking place behind closed doors in most parts of Germany, many smaller clubs have given up their home advantage and requested to play away instead, citing the prohibitive costs of staging matches without fans.

"It's not a decision we've taken lightly and we've done everything we can to try and play at home," Siegfried Richter, the president of fourth-division side Union Fürstenwalde, told German public radio station RBB.

Fürstenwalde have qualified for the cup for the first time after winning last season's regional Brandenburg Cup. They have been drawn against Bundesliga side Wolfsburg, but the match will now take place at the Volkswagen Arena.

"The temporary television camera positions require significant building work, including 16-meter high towers, and those costs have to be met by the home club," explained Richter. "The economic risk is simply too much."

Participants in the first round of the cup receive prize money of €175,000, but the coronavirus pandemic brings additional costs, with clubs also required to develop a strict hygiene concept, including testing and quarantine measures. Back in June, such a concept meant it cost Lokomotive Lepizig over €30,000 just to stage a single promotion playoff match behind closed doors – with no ticket sales to cover the costs.

Also making their cup debut are fellow fourth-division outfit VSG Altglienicke, who have been drawn against Cologne after winning the local Berlin Cup last season. But instead of welcoming the Billy Goats to the capital, Altglienicke will instead travel to the 50,000-seater RheinEnergieStadion, which recently hosted the Europa League final between Sevilla and Inter.

"In the end, economic sense won the day," chief executive Marco Schröder told RBB. "It's a shame that we can't play in our own stadium but it will still be a great experience for the players and the staff, playing in a stadium which hosts international games."

Other amateur clubs who have given up their home advantage for financial reasons include fifth-division 1. FC Düren (vs. Bayern), TSV Havelse (vs. Mainz), FC Oberneuland (vs. Borussia Mönchengladbach) and Eintracht Celle (vs. Augsburg).

Fourth-tier Schweinfurt, representing last season's still-ongoing Bavarian regional league, will travel to Gelsenkirchen to face Schalke, but at least that game will be played in front of spectators. The Royal Blues announced this week that 300 tickets (the maximum number of spectators currently permitted at sports events in the state of North Rhine Westphalia), will be distributed free of charge to key workers from local hospitals and care homes.

Schalke's Ruhr valley rivals Borussia Dortmund will also play in front of 300 spectators when they make the short trip to third-division Duisburg – whose stadium also hosted Europa League fixtures this summer. There was controversy last week when it was announced that all 300 tickets would go to German Football Association (DFB) sponsors, but that decision has since been watered down. One hundred tickets will now be made available via a ballot to supporters who purchase "virtual" fundraising tickets.

With attendance regulations varying across Germany from state to state according to rates of infection, some clubs in certain regions can welcome more fans. In the eastern state of Saxony, for example, fourth-division Chemnitz can make the most of their home advantage when they host Hoffenheim in front of over 4,600 supporters. Similarly, third-division Dynamo Dresden are hoping to welcome around 10,000 fans when they face Hamburg.

Meanwhile on the Baltic coast in the state of Mecklenburg-Western Pomerania, Hansa Rostock have incredibly been drawn against VfB Stuttgart for the third year in a row. Previous meetings produced electric atmospheres, but this one will be limited to an attendance of 7,500.

It's better than nothing, and the smaller clubs will be hoping that the loss of their home advantage and the lack of fans will not end up damaging the magic of the cup.