A court in Hamburg has sentenced the widow of an "Islamic State" terrorist to extra jail time. The woman admitted to using enslaved Yazidi girls to clean her home. 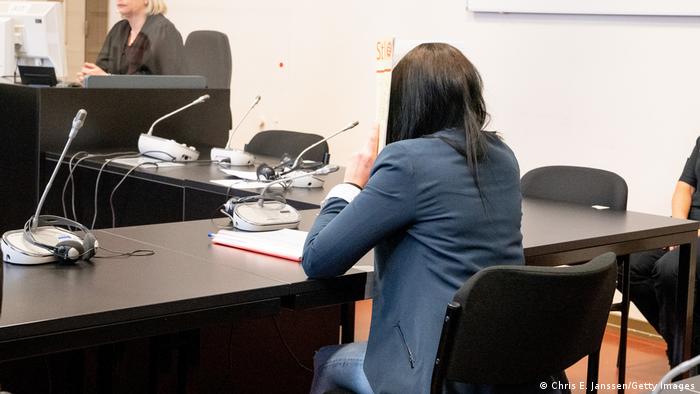 A German court on Thursday sentenced the woman, Omaima A., to additional jail time for using slave women to clean her home.

The 37-year-old, already convicted of belonging to the "Islamic State" (IS) militant group, had already admitted the offense, the DPA news agency reported.

The court confirmed to DW that a previous sentence of three and a half years would be extended to four years in total.

The defendant told the court that, at the beginning of 2016, she had two Yazidi slave girls clean her living quarters. Omaima A., the widow of former rapper and IS fighter Denis Cuspert, said she got in contact with the girls through a friend but admitted it was clear to her they were there against their will.

"I showed the place to the two slave girls and told them which areas they should clean," she said at the time.

The German-Tunisian woman, who was born in Hamburg, distanced herself from IS and said she regretted her misconduct. She had apologized to the two women, one of whom was a plaintiff in the trial.

The woman had already been convicted of aiding and abetting slavery for keeping watch over another enslaved Yazidi girl, a 13-year-old, for several hours.

The admission of guilt to aiding and abetting slavery was by agreement earlier in the process. The Hamburg prosecutor general's office had demanded a prison sentence of two years. However, taking her initial sentence into account, the prosecution and defense agreed to a plea bargain with a total sentence of four years.

Syria and Iraq's Yazidi minorities were subjected to mass killings, abductions, and sexual slavery at the hands of IS. The ethnic group follows a religion that includes elements of Christianity, Judaism, and Islam. The ultra-conservative Islamic militants consider them to be subhuman devil worshipers.

In October last year, a Hamburg court sentenced Omaima A.  to jail for membership in a terrorist organization abroad. She was also found guilty of neglecting her duties as a parent and possessing illegal firearms, as well as aiding and abetting slavery.

Omaima A. is believed to have traveled to Syria with her three small children in 2015 to join IS.

Her former husband Cuspert, who used the name Deso Dogg during his rap career, is believed to have died in Kobane in 2018.

The woman was arrested after rumors of her presence in Germany spread when a cellphone purportedly belonging to her was discovered by a war reporter in Syria.

It was unclear how Omaima A. lost her phone or whether she deliberately left it behind when she decided to return to Germany, but it was said to contain some 36 gigabytes of data documenting her life with IS.