A German court has ruled against bringing to trial 10 people accused of involuntary manslaughter for the death of 21 people in a crush at the 2010 Love Parade in Duisburg. The prosecution can appeal to a higher court. 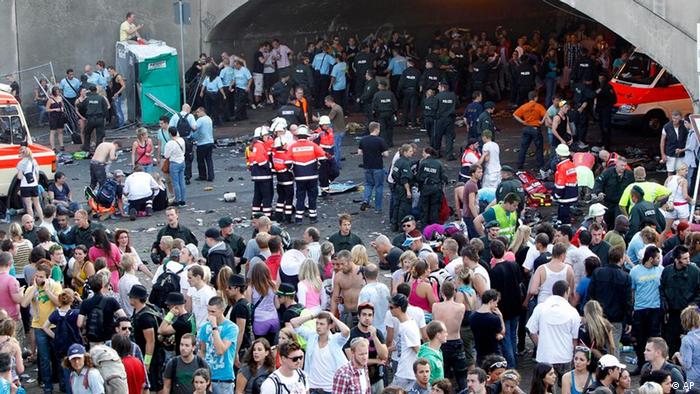 The district court in Duisburg on Tuesday decided not to bring 10 people to trial in connection with a crush at the 2010 Love Parade. In the stampede, 21 concertgoers were trampled to death and at least 652 were injured.

Two years ago, prosecutors indicted six employees of the city and four organizers from the company Lopavent on charges of involuntary manslaughter and involuntary assault for the tragedy at the July 2010 electronic music festival.

It was going to be Germany's biggest-ever techno party. Instead, July 24, 2010, was a disaster. Panic broke out and 21 people died when escape routes were too narrow for the masses. Many others were traumatized. (23.07.2015)

The crush occurred in the only tunnel leading to the festival grounds, creating a bottleneck and panic. It ended one of Europe's most popular music festivals, which regularly drew hundreds of thousands of people.

The Duisburg court arrived at the decision after deliberating on whether the evidence provided was sufficient to secure a probable conviction. The court found insufficent evidence and ruled against the prosecution.

"The accusations against the accused cannot be proven with the evidence presented, therefore, a conviction of the accused is not to be expected," the court said in a statment. Cases can only be accepted if there is deemed to be "sufficient probability" of them leading to a conviction.

The prosecution and co-plaintiff can object at a higher court in Düsseldorf. If that court refuses the case it will be closed.

The legal system is 'bankrupt'

Düsseldorf-based lawyer Julius Reiter, who is representing relatives of the victims, told the local Rheinische Post newspaper that the decision was scandalous. He said that it was a "declaration of bankruptcy from the legal system, that after more than five-and-a-half years of investigations by public prosecutors, the charges are not accepted and the main case is not opened."

Chief Minister Hannelore Kraft of North Rhine Westphalia, where Duisburg is located, said she could understand the court's decision "only with much difficulty." The verdict meant more pain for the families and friends of the victims. They had been waiting for a clarification on incidents which happened that day, the wait had become much longer now, Kraft told reporters.

North Rhine Westphalia's Justice Minister Thomas Kutschaty also said he could understand how the victims' relatives were feeling, but one had to keep in mind that the trial was one of the most complicated cases after World War II. Duisburg's Mayor Sören Link also said the decision would be difficult to digest, especially since those who had lost their loved ones would not think about procedural irregularities.