Young members of German Chancellor Angela Merkel's conservative party sang a Nazi-era song in a bar on November 9. A Jewish artist filmed the incident hours after she marked 80 years since the Kristallnacht pogrom. 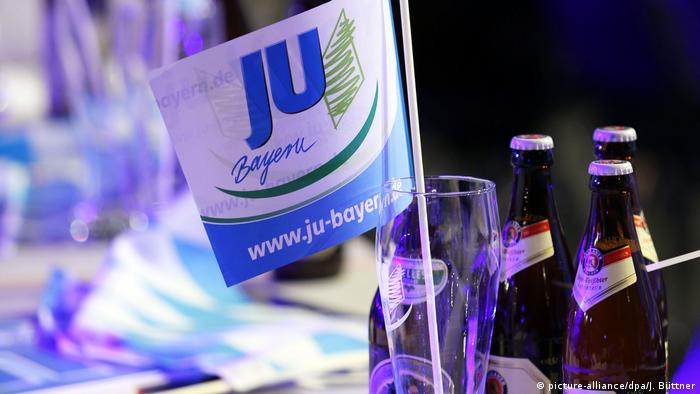 Members of the conservative Christian Democrats' (CDU) youth wing have issued a qualified apology after they were filmed singing a Nazi-era military song on the anniversary of an infamous Nazi pogrom against Jews.

Berlin-based newspaper Der Tagesspiegel published the video after it was filmed by a Jewish artist in a Berlin bar on November 9.

Around 15 Young Union (JU) members are seen sitting around a table bellowing out the "Westerwaldlied" ("Westerwald Song").

The song, written in 1932, was sung by German soldiers during Nazi Germany's invasion of France, Luxembourg and the Netherlands. The German military stopped printing it in its official songbook in 2017.

The artist who made the recording, Linda Alvizuri Sommerfeld, said the group of aspiring CDU politicians had also repeatedly railed against what they called "faggots" before she started filming.

The local JU chapter the group belongs to, JU Limburg, apologized for any disturbance its members' behavior or singing may have caused in the bar.

'The whole of Berlin was burning'

But it dismissed any serious wrongdoing and criticized what it said was a "digital witch hunt" against its members following the revelation.

"The 'Westerwaldlied' has been an established and popular folk and hiking song among our members for decades," it said. "We regret that it is not possible in a city where smoking pot is tolerated again and again to sing a German folk and hiking song whose text is not accompanied by any political statement."

The organization did not comment on the significance of singing the song on November 9.

On November 9, 1938, anti-Semitic mobs assaulted Jews and destroyed Jewish property throughout Germany with the implicit approval of the Nazi German government. Many Jews were killed during "Kristallnacht" or "Night of Broken Glass," as it later became known.

The artist who filmed the JU members told Der Tagesspiegel that she had laid flowers to mark the 80th anniversary of the Kristallnacht pogrom only hours before the incident in the Berlin bar.

"[November 9 is] a day of mourning for me and my family," Linda Alvizuri Sommerfeld said.

The state chapter associated with JU Limberg defended the singing of the Westerwaldlied but promised to investigate the incident for any wrongdoing. It acknowledged that the song's recital on November 9 in Berlin had been "unfortunate."

"It is important to the state executive committee that members and officials of the Junge Union Hessen act appropriately and responsibly at all times," it said.