The German Cabinet has approved legislation allowing refugees with so-called "subsidiary" status to bring their direct relatives to Germany. The finer details have exposed deep divisions within the governing coalition. 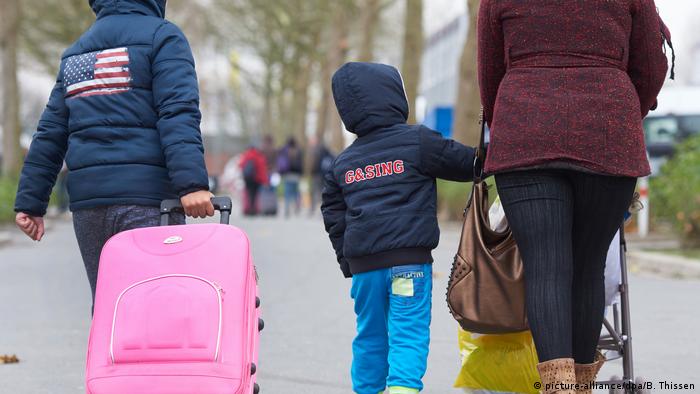 German Chancellor Angela Merkel's Cabinet on Wednesday voted to resettle an additional 1,000 migrants per month, provided they are the direct relatives of refugees already living in Germany.

The issue of migrant family reunifications has been a major sticking point in parliament and has exposed deep divisions inside Merkel's governing coalition.

What does the new family reunification law grant?

Where the parties stand

Back in February, the Bundestag passed legislation to reintroduce family reunifications for lower-level migrants, following a two-year suspension. The three parties that ultimately ended up forming the new coalition — Merkel's Christian Democrats, their Bavarian sister party, the Christian Social Union (CSU), and the Social Democrats (SPD) — all agreed on setting the monthly quota at 1,000.

However, provisions allowing potential terror suspects to apply have prompted outrage inside some parts of the CSU. Michael Friese, a CSU parliamentarian, accused the SPD of allowing an additional contingent of migrants to enter through a "back door."

On the left, the Greens and Left Party have decried the new regulations for being too restrictive, since they don't cover migrants' siblings.

Syrian refugees particularly affected: The new legislation has a particular bearing on Syrian migrants in Germany, the majority of whom were only granted subsidiary protection because they were fleeing civil war and couldn't prove that they were personally persecuted. Their lower-level status means they are required to return to Syria once the civil war is officially over and Germany deems is safe to return. However, with Syrian President Bashar Assad set to hold on to power, it remains unknown how the government will treat returning Syrians who refused to fight on behalf of the regime.

Why did Germany suspend family reunifications for subsidiary migrants? In March 2016, the German government introduced a two-year suspension on family reunifications for migrants only entitled to subsidiary protection. The bill was introduced in the immediate aftermath of the 2015 migrant crisis and sought to slow down the influx of refugees arriving from besieged regions in the Middle East. In February 2018, the Bundestag voted to extend the suspension by six months, while lawmakers negotiated the terms for the new bill.

Will migrants make use of the new law? Local media reported on Wednesday that some 26,000 enquiries for family reunification had already been made at various refugee agencies across the country, three months before the legislation is due to come into force. The German government, however, has vowed to abide by the strict cap, allowing no more than an additional 1,000 migrants to settle in Germany per month. Fulfilling all these requests under the current quota system would therefore take years.

Parliamentarians are grappling with a new law to reunite families with migrants who have fled dire circumstances, but who don't have refugee status. Both the left and the right have concerns about its implementation. (19.01.2018)