The German Cabinet has cleared a bill to further restrict travel of potentially dangerous Islamists. The draft legislation, which will now head to the Bundestag, seeks to prevent the export of jihadis to the Middle East. 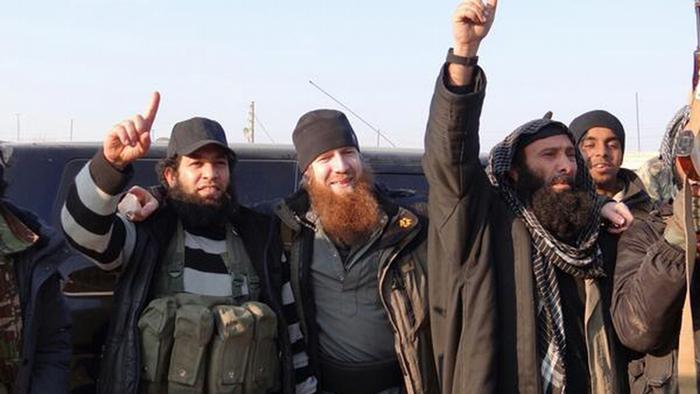 Chancellor Angela Merkel's Cabinet on Wednesday morning approved a bill seeking to further curb what German media sometimes call "terror tourism" to Syria and Iraq. The bill will now be passed on to the Bundestag for further debate.

Germany's Justice Minister Heiko Maas, a Social Democrat (SPD), drafted the bill in line with a United Nations resolution from last September on so-called foreign fighters - people who are recruited in foreign countries to fight elsewhere. Maas said Germany would soon have "one of the strictest anti-terror laws in all of Europe."

The bill goes further than existing legislation which allows the prosecution of returning jihadis; it seeks to declare unlawful not only traveling to but also attempting to travel to any area in which there is a terrorist training camp, if the goal of the trip is to carry out an "attack that would endanger the state," or to receive training for such an attack.

Under the new law, sentences for such activities could include six months to ten years imprisonment and in less extreme cases, three months to five years.

Aiming to disrupt the cash flow for the "sometimes highly organized terrorist activities," the bill also seeks to reform laws on donations to terrorist organizations to include the prosecution of all donors to such groups, small and large alike.

In addition to the strict new legislation, Chancellor Merkel's Christian Democrats would also like to see the implementation of legislation which would allow German authorities to collect and save data at random on its citizens - similar to the US - along with laws that would make the act of sympathizing with any extremist organization unlawful.

Criticism has come from the Left and the Greens, whose members say the legislation is over the top. Left party member Jan Korte said the bill was nothing more than "useless symbolic politics." The Greens' legal experts Hans-Christian Ströbele and Katja Keul believe the bill, if passed into law, would infringe upon basic rights set out by the constitution.

Andy Neumann of the Federal Criminal Police Office (the Bundeskriminalamt) told the public broadcaster MDR that the debates on the bill were nothing more than a "staged act of legal acrobatics." He said there was no lack of legislation to fight terrorism. What was needed instead, he said, were more qualified investigators, material resources and a law on data gathering that was in line with the constitution.

According to a UN report published in October last year, the number of foreign fighters aiding extremist groups in the Middle East has risen sharply since 2010. The study found that around 15,000 from over 80 countries had been operating in Iraq and Syria with groups such as al Qaeda and "Islamic State" (IS) at the time of publication. Of the over 3,000 fighters from Europe who are currently in the region, around 600 are thought to have traveled there from Germany.

To curb this trend, the German cabinet agreed on January 14 on a plan presented by Interior Minister Thomas de Maiziere (CDU) to prevent potentially dangerous Islamists leaving the country to fight in Syria and Iraq - by taking away their passports and ID cards and issuing replacement ID cards instead. De Maiziere said that while the plan wouldn't put a complete stop to travels by German Islamists, it would certainly lower the number of departures by making it more difficult to leave the country.

"In the situation we're in right now, effective measures that reduce the problem and not completely solve it are still sorely needed," he said.

"We don't want terrorism to be exported. We don't want men and women to be radicalized here and to travel to Syria and Iraq to come back here ready to fight and to plan attacks," Interior Minister Thomas de Maiziere said when first introducing the concept of the replacement ID in October 2014.

That measure was presented in the Cabinet one week after the attacks in Paris by Islamist extremists, including the attack on French satirical magazine Charlie Hebdo, which resulted in 17 deaths over three days from January 7.

German authorities have laid charges against a 30-year-old woman who took her two daughters to Syria. She has been accused with preparing an act of violence. (04.02.2015)

What should Germany do against home-grown Islamists who leave for Jihad in Syria or Iraq? When it comes to German citizens, authorities' hands are mostly tied. The earlier they act, the easier it is to intervene. (19.09.2014)

A Bavarian criminal investigator has admitted that the state once actively encouraged radicalized Islamists wanting to fight in the Middle East to leave Germany. Nowadays, the priority is preventing their departure. (02.10.2014)