Decision-makers from business, science and politics in Germany are at the annual Diversity conference to show their commitment to an inclusive workplace. But many attendees complained that the country is lagging behind. 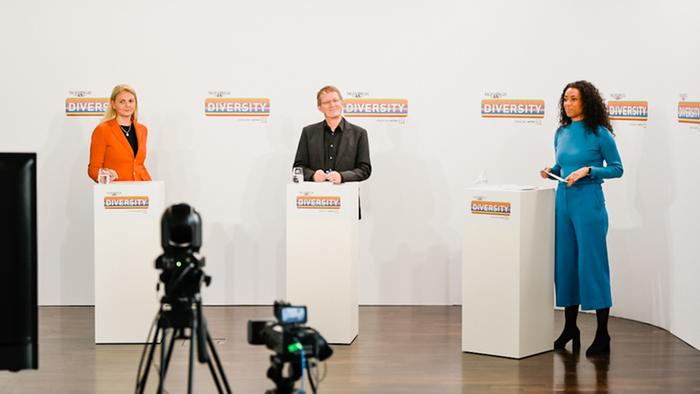 Top executives, experts, activists and representatives of prominent media houses in Germany gathered digitally on Thursday for the first of two days at Diversity 2021, an annual conference dedicated to the subject.

The event brings together decision-makers from many fields in Germany to discuss diversity management. It is hosted by Berlin newspaper Der Tagesspiegel and Charta der Vielfalt, an association dedicated to promoting diversity in the workplace. The conference this year celebrated its 10th anniversary.

Running under this year's motto "Allyship together for diversity," the 2021 conference focused on the question of how companies could make the internal changes required to become a diverse and inclusive workplace.

The event, held digitally this year due to the coronavirus pandemic, featured speeches and panel discussions in which German companies and media houses laid out the importance of diversity to their organizations and what steps still needed to be made.

"We're already reaching many people in the working world, but not enough," event co-host and chairwoman of Charta der Vielfalt's board of directors Ana-Cristina Grohnert said at the conference.

"We also have to reach those companies for whom diversity, from their point of view, doesn't play a role yet, and who haven't yet developed an understanding for it."

A backing from big business

Among the attendees were some of Germany's largest and most profitable companies, as well as some international players.

Siemens Financial Services and chemical giant Merck laid out massive diversity and sustainability initiatives implemented by their companies. Mark Crawford, senior vice president of Diversity and Inclusion at oil and gas giant British Petroleum (BP), was also present to discuss his company's diversity initiatives and how it had become "important to talk about race," particularly in the atmosphere of social unrest that followed the murder of George Floyd, a Black man killed at the hands of the police in the US in the spring of 2020.

Ethnic minorities were making up a larger and larger share of the global talent pool, Crawford said. "We needed to do something more progressive if we wanted our company to become a place where everyone felt a sense of belonging."

A reckoning for the press

Members of Germany's media also contributed to at times passionate discussions on the importance of fostering diversity in the media.

In one discussion, Tagesspiegel publisher and event co-host Stephan-Andreas Casdorff defined what the event's motto meant to him.

"Some say, 'Allyship? What's that?' It's solidarity. I've got your back and you've got mine."

He called on the German politicians currently in talks to form the country's next federal government to live up to their calls for modernization and embrace diversity in politics as well. As an example, he pointed to US President Joe Biden naming an openly transgender woman to a key federal position earlier this year.

"It's wonderful. Where is that here in Germany? Progress, disruption, modernization, it can't happen without that."

Grohnert backed up his point by emphasizing the economic importance of diversity.

"We're now saying that diversity is a modernization factor and a driver of the economy, in that

businesses that embrace it are capable of learning," she said. "They are disruptive. They have really learned something through diversity and are not just thinking about themselves and are moving out of their comfort zone."

Participants also discussed how organizations could strive to address seven different aspects of diversity and inclusion. These include age, ethnicity and nationality, gender and gender identity, physical and mental abilities, religion and worldview, sexual orientation and social background.

When asked if a media landscape diverse on this level was possible in Germany, the director of the Institute for Media Research at the University of Rostock, Elizabeth Prommer, responded, "Yes, of course. Why not?"

"We can think intersectionally here," she said. "I believe that we humans are capable of thinking in several dimensions." An inclusive media landscape can be achieved by setting diversity as a goal and engaging employees who meet several diversity qualifications, she said.

Sven Gössman, editor-in-chief at DPA, Germany's press agency, agreed that his agency, too, wanted its newsroom to be as diverse as the German population.

"It's important that there is someone who will raise objections to certain creative processes," said Gössman.  "Who says, 'No, the way we're handling this topic is no longer adequate.' — someone to keep breaking the rituals and the traditions of editorial processes."