TOPModel uses a cast of 14 dolls to market its stationery and makeup products to girls. A German initiative to challenge harmful messages in ads has just awarded the brand a prize for "absurd gender marketing." 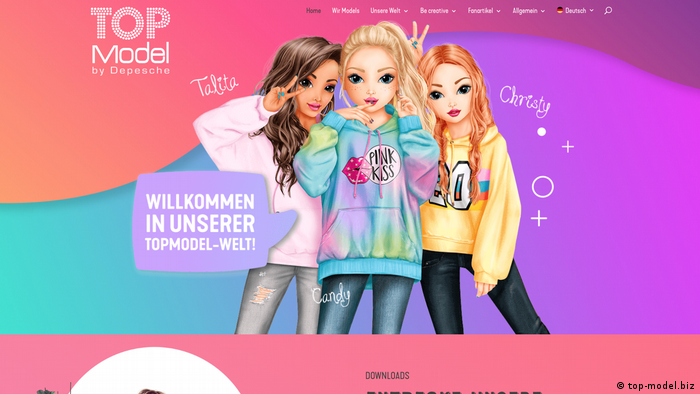 A German prize recognizing the worst gender stereotypes in advertising has gone to the brand TOPModel.

Owned by Depesche, a company based just outside of Hamburg, the brand was criticized for pushing an unrealistic and limited idea of beauty when marketing its magazine, school supplies and makeup.

The organizers of the "absurd gender marketing" award, known as the "Goldener Zaunpfahl," said TOPModel "more than deserved" to win the title.

(A Zaunpfahl is a fence post, and a German idiom that directly translates as "waving with a fence post" means that you are either stating the obvious or dropping a hint in a manner that is not in the least bit subtle — hence the "golden fence post" award.)

At the center of the brand's products and social media posts are its "top models," a cast of 14 female comic characters who are all slim with pouting lips and big eyes.

"The brand's 14 dolls suggest diversity, but then again, they only represent one and the same beauty ideal," the prize organizers said. "What sounds like diversity and individuality is, on the contrary, a stereotypical and very limited picture of what girls should be interested in and, in particular, what they should look like."

Read more: The objectification of women in advertising

Consumers were asked to vote for the worst offender in an online poll. TOPModel's marketing campaign won "by a clear margin" among the pool of seven nominees, the organizers said.

Second prize went to an ad for the German supermarket chain Edeka, which shows a series of black and white vignettes of incompetent fathers parenting, and culminates with a child saying: "Thank you mummy that you are not daddy."

Completing the somewhat ignoble podium was a poster campaign designed to attract dental assistants that asked: "Does your daughter already know what she wants to be?"

The award is an initiative of klische*esc, a German organization that says it aims to challenge advertising messages that rely on gender stereotypes by starting "a social dialogue about the [effects] of advertising and product design."

It has been handing out the award for worst gender cliches in advertising since 2016.

A ban has come into force prohibiting commercials that reinforce gender prejudices. A prominent German feminist told DW that Germany is dragging its heels on the problem.