The Berlin show "Women on View" examines how photographers like Helmut Newton have depicted women as objects of desire. Despite today's gender rights movements, advertising remains in the Dark Ages of gender cliches.

"Sex sells" is one of advertising's oldest myths. The group exhibition "Women on View: Aesthetics and Desire in Advertising" at Berlin's Chaussee 36 gallery examines how the female figure has been used in advertising throughout the decades.

Featuring photos by some of the most famous names in fashion and commercial photography, the images are meant to spark a dialogue about the eroticization of the female body in western advertising and its impacts on society. While researchers have found that the "sex sells" doctrine may well be false, its prevalence in media has long been criticized for promoting unattainable beauty ideals.

Despite the women's emancipation movement of the 70s, and even in the age of #MeToo, gender clichés remain painfully present in the advertising realm. From early product advertising in the 1940s to hypersexualized female forms in the 1990s, scantily clad and unrealistically perfect female forms still flit across television and computer screens, billboards and the glossy pages of magazines today.

The mechanisms of sexual advertising

An exploration of the effects of sexualized advertising is posed by sociologist Esther Loubradou in a paper published in conjunction with the exhibition. Loubradou points out that the advertiser's main goal is to persuade the consumer and attract attention. To do so, she continues, an ad must make our brain react. Sexual advertising "appears to have all of these ingredients" by titillating emotional areas of the brain, transgressing taboos and appealing to basic needs.

While some of the most dramatic images belong to the fashion world, a range of products, from alcohol to perfume, have historically presented women as objects of lust and desire. More and more often, advertisements are moving away from explicitly selling a product, promoting an idealized lifestyle instead.

Today, the internet quickly disseminates images to viewers, making brands and advertisers fight even harder for attention. This race for views has led to taboo breaking, specifically in the world of fashion photography.

Photographers like Terry Richardson, Harder points out, took images to the point of obscenity, featuring women in poses which many critics have called exploitative and perverse. Richardson's career quickly plummeted once #MeToo movement broke; the photographer now faces a series of sexual assault and harassment allegations. 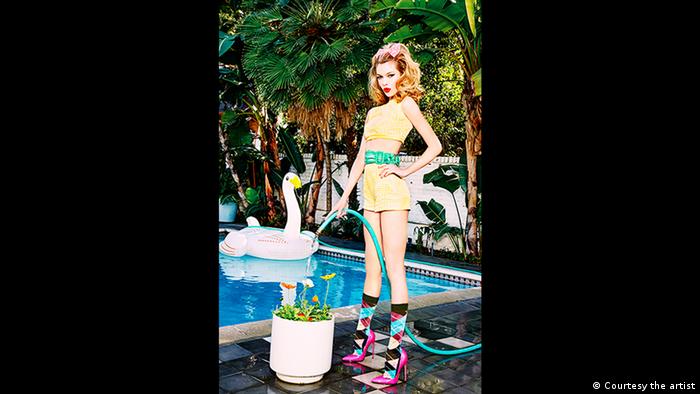 German photographer Ellen von Unwerth, for instance, says she has a feminist approach to he work: "The women in my pictures are always strong, even if they are also sexy. My women always look self-assured. I try to make them look as beautiful as they can because every woman wants to  feel beautiful, sexy and powerful. That's what I try to do."

The #MeToo movement started spreading over a year ago; it still remains to be seen if mentalities in advertising will radically change in the years to come. For now, the advertising world appears to be a long way off: "Even though studies document a decrease of salacious portrayal in advertising in recent years," writes Harder, "every third advertising image featuring a woman can still be regarded as sexualized."

The exhibition "Woman on View: Aesthetics of desire in Advertising" is on show in Chaussee 36 gallery in Berlin from February 2 through April 27, 2019.