Germany's financial watchdog has closed down the German subsidiary of a Canadian bank. The company has been accused of tax evasion and money laundering. 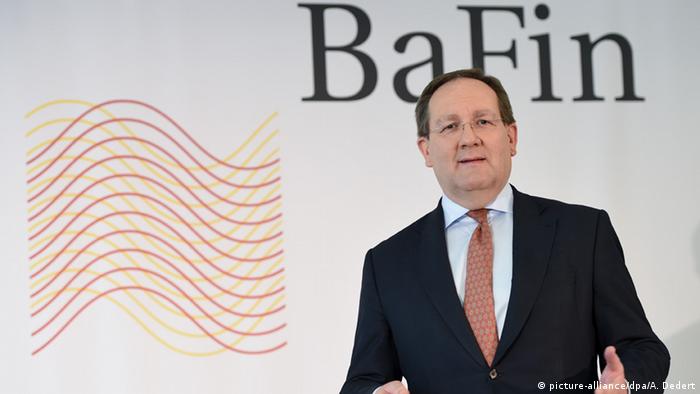 The Federal Financial Supervisory Authority (BaFin) said Sunday it was shutting down the German arm of Maple Bank, which is part of Canada's Maple Financial Group.

BaFin, which is headed by Felix Hufeld (pictured), accused the Frankfurt-based lender of tax evasion and money laundering, saying the company will have to set aside funds to cover tax payments.

A small lender, Maple Bank has total net assets of just $5.6 billion (5 billion euros) and liabilities of $2.9 billion, and is therefore at risk of "impending financial over-indebtedness." Authorities are closing the bank to customers and preventing the bank from taking payments not related to its debt.

No threat to Germany's stability

The watchdog said its closure poses no threat to Germany's financial stability.

Maple Bank is best known in Germany for having assisted carmaker Porsche in its attempt to take over German auto manufacturer Volkswagen in 2008.

The new head of Germany's biggest lender means business: John Cryan has announced a radical overhaul aimed at "building a better bank." The change of course is bold, says DW's Henrik Böhme, but fraught with peril. (19.10.2015)

Germany, home to 4 million Muslims, just got its first lender that adheres to Sharia law. Charging interest is prohibited, but some analysts see little difference to the way normal banks operate. (21.07.2015)