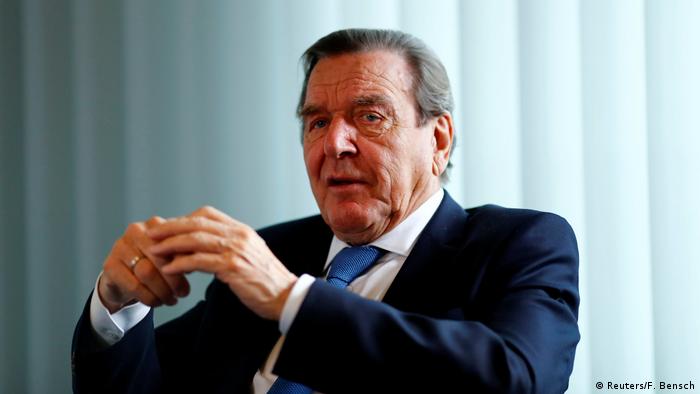 Politicians from Germany's Christian Democrats (CDU) and the Green party have demanded that former Chancellor Gerhard Schröder  step down from his position as chairman of the board of directors of the Nord Stream 2project, as well as all other posts in Russia.

Critics have accused Schröder of lobbying for the Kremlin in his position.

Johann Wadephul, defense spokesman for the CDU, told the Sunday edition of Berlin daily Tagesspiegel that Schröder must "immediately give up his offices and posts in Russia." Wadephul said Moscow was solely responsible for the poisoning of Russian opposition leader Alexei Navalny, who is currently being treated in a Berlin hospital.

Even if the Russian government denied responsibility, a former German chancellor should not ignore this, "neither politically nor morally," he said.

Chancellor Angela Merkel said Wednesday that Navalny was the victim of a murder attempt using the nerve agent Novichok, and demanded an explanation from Moscow.

Some politicians have also questioned whether Germany should continue working on the Nord Stream 2 natural gas pipeline project­­ — in which the Russian company Gazprom is formally the sole shareholder — in the wake of the attack on Navalny.

The Green party's parliamentary leader Katrin Goering-Eckardt, who had already called for construction work on the Nord Stream 2 to be stopped, urged Schröder to give up his work for Gazprom.

"Former SPD Chancellor Schröder must now decide whether he is on the side of democracy and human rights," Goering-Eckardt told the newspapers of the Funke Mediengruppe media company.

The natural gas pipeline project, which will take gas from Russia to Germany, is more than 90% completed and scheduled to operate from early 2021.