In power since 2012, Georgia Dream's popularity has fallen due to economic stagnation and claims of perceived backsliding on democracy.

Read more: In Georgia, thousands call for government to step down

Incumbent Prime Minister Giorgi Gakharia earlier this week said he aimed to bring the ex-Soviet republic closer to the European Union and NATO.

"This will be another step forward for Georgian democracy," Gakharia said.

Pro-Western Saakashvili, who has lived in exile in Ukraine since 2013 to avoid Georgian prosecution, fronts an opposition coalition comprising his United National Movement (UNM) and some 30 smaller parties.

Both Georgian Dream and United National Movement are pro-Western, with goals of establishing better relations and possible eventual membership of NATO and the European Union.

Due to Georgia's complex electoral rules, analysts said the parliament's final make-up might only become clear by late November. 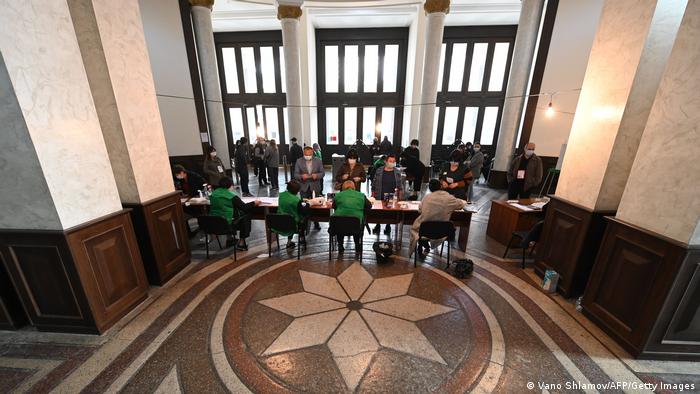 Long lines were reported at some voting places in Georgia

Preliminary results were expected Saturday night. Constitutional amendments made in early 2020 require the winner to secure more than 40.54% of the vote.

As polling opened in autumn sunshine in the capital, Tbilisi, plumber Lasha Guruli told the AFP news agency he was "very optimistic" of an opposition win. Surveys suggested a tight race in the country of 4 million people.

Saakashvili, who served as president from 2004 to 2013 and who is still wanted by Georgian prosecutors on abuse-of-office charges that he rejects, had told supporters in Tbilisi via video link on Thursday: "Our victory is approaching."

Georgia was ready, he said, "to choose freedom over oppression, prosperity over poverty, progress over backwardness."

Critics accuse Ivanishvili — who is widely seen to be calling the shots in Georgia — of persecuting political opponents, creating a corrupt system and amassing wealth while pursuing pro-Russian policies.

During Saakashvili’s past nine-year presidency, Russia and Georgia fought a war in 2008 that ended in Tbilisi losing control of two Russian-friendly separatist regions.