In Georgia, thousands call for government to step down

Thousands of people have gathered in Tbilisi, waving national and EU flags and demanding that the government resign in their call for electoral reform. Riot police have clashed with protesters trying to block parliament. 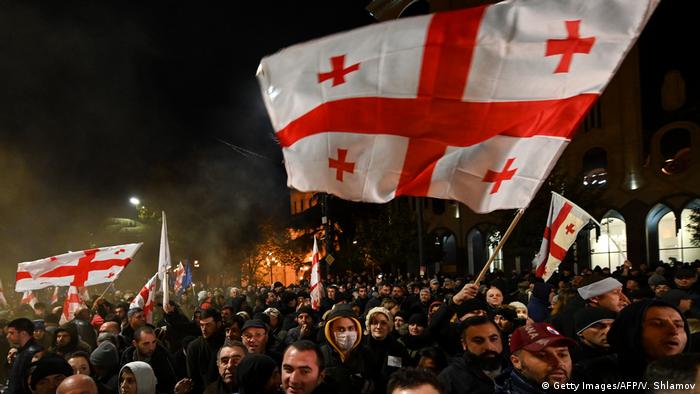 Riot police have used water cannons to scatter dozens of protesters gathered near Georgia's parliament early on Tuesday, as they tried to blockade parts of the building and prevent lawmakers from entering later in the day.

The demonstrators were among thousands who gathered in the Georgian capital, Tbilisi, earlier in the evening, demanding electoral reforms.

But their demands were ignored. "If protesters violate the law, the state will act adequately," Mamuka Mdinaradze, a lawmaker from the ruling party, told the Reuters news agency.

Giorgi Vashadze, one of the opposition leaders, told reporters that several people, including one opposition politician, had been detained by police. 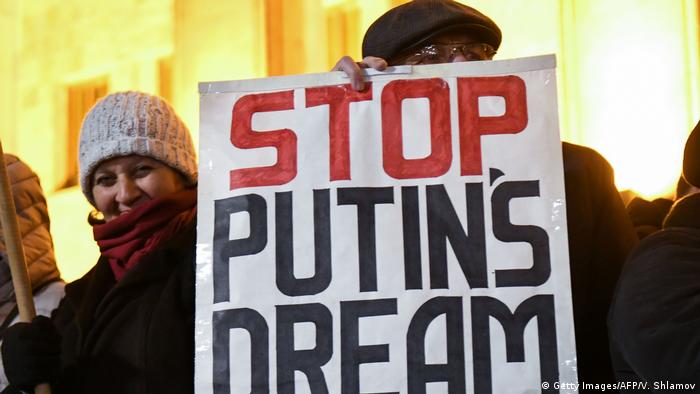 Protesters held up an anti-Russia placard, denouncing Russian influence in the country

Just last week, Georgia's ruling party backtracked on electoral reforms in the former Soviet country, causing demonstrators to take to the streets. Protesters said they were fighting not just for alterations to the electoral system, but for democracy itself.

Electoral change was due in 2024, but the opposition is demanding it be brought forward, saying the rules benefit the ruling Georgian Dream party.

The recent protests follow unrest earlier in the year, as Georgians rallied against Russian influence in the country. Relations between Georgia and Russia have long been fractured over Tbilisi's efforts to join the European Union and NATO.

Georgia is in turmoil. Hundreds of people were injured in protests earlier this week in Tbilisi, and the parliamentary speaker was forced to resign. A veritable political crisis might be looming, says Christian Trippe. (23.06.2019)

Dozens of people were detained in Georgia after anti-government protesters attempted to block the parliament building in central Tbilisi. The unrest started when the ruling party went back on a key reform promise. (19.11.2019)

Protesters calling for a stronger pro-European course by the Georgian government have forced a meeting between their leaders and Prime Minister Irakli Garibashvili.

The Solomon Islands' prime minister has said he wants to delay the 2023 election until after his country has hosted the Pacific Games. Critics see the move as another step to undermine democracy in the Pacific nation.