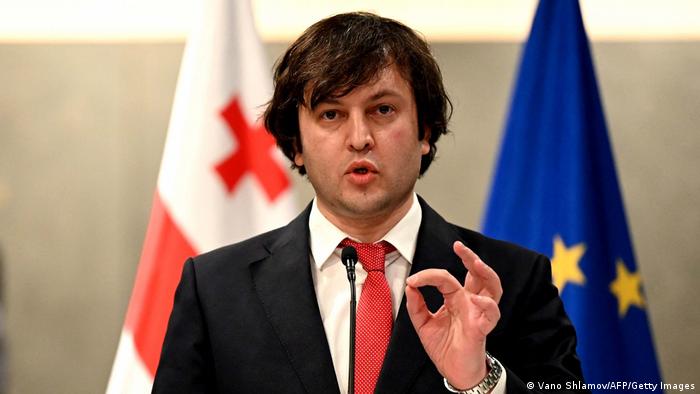 Georgia's ruling party said Wednesday that it would "immediately" put forward an application to join the European Union.

Irakli Kobakhidze, the chairman of the ruling Georgian Dream party, urged the EU during a press conference "to review our application in an urgent manner and to make the decision to grant Georgia the status of an EU membership candidate."

Georgia is expected to put forward the application on Thursday. The Caucasian country had initially planned to apply in 2014 but reversed its stance amid pressure from the opposition and demonstrators.

Kobakhidze, on Tuesday, said Georgia would not submit such an application for EU membership until 2024, adding that "a hasty initiative could be counterproductive."

Following the Russian invasion of Ukraine, Kobakhidze said the government in Kyiv would have Georgia's support, but he declined to join the EU, US and other nations in imposing economic sanctions on Russia.

Georgia: The long farewell to its Soviet legacy

Russia used the grievances of Kremlin-aligned separatists in the eastern Ukrainian regions of Donetsk and Luhansk as a pretext to stage an attack on Ukraine.

A similar scenario previously played out in Georgia.

Georgia and self-proclaimed republics of South Ossetia and Abkhazia

Russia backs two breakaway self-proclaimed republics in Georgia, South Ossetia and Abkhazia. Tensions over the two regions resulted in a brief Russian invasion of Georgia in August 2008, with Moscow recognizing the independence of the two regions after a ceasefire.

Moldova, the poorest country on the European continent, also aspires to EU membership. Moldovan President Maia Sandu has voiced concerns about a Russian invasion, as thousands of Russian soldiers are stationed in the breakaway region of Transnistria.

The EU has strict standards for admission. It took the bloc's most recent member, Croatia, 10 years to go from application to membership.

Both Georgia and Ukraine have signed association agreements with the bloc, but these deals do not ensure membership in the bloc.