Generation gap eats at Muslim Brotherhood | World | Breaking news and perspectives from around the globe | DW | 09.03.2015

In a movement that's nearly a century old and has long been led by aging men, it's the youth of Egypt's Muslim Brotherhood who are beginning to call the shots. Kristen McTighe reports from Cairo. 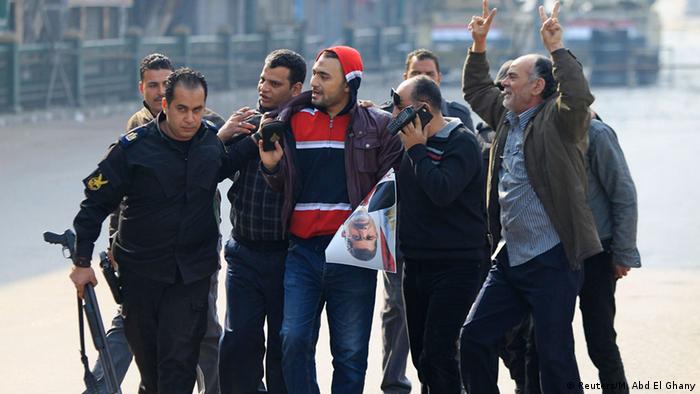 "Communication [with the younger generation] and trying to understand the youth didn't start until after the ship sank, after the coup and the massacre," said Hend, a 20-year-old member of the Muslim Brotherhood who asked to go by only her first name because of the crackdown on the group.

"Most of our leaders are now in jail. Most revolutionary movements come from the streets where the youth have played an essential role."

"This is a battle of youth," she told DW.

Frustrated and impatient with a leadership that has been jailed, exiled and left in disarray, young members of the Muslim Brotherhood have become difficult to control. And as the chasm between the Brotherhood's young and old has grown, it has raised fears that growing numbers of youth could turn to violence or radicalize.

"Generally speaking, the older generation of Brotherhood are risk, revolution, and instability avoiders, totally unlike the young people," said Hamza Sarawy, a 24-year-old who worked in the administration of ousted Islamist president Mohammed Morsi, but is now a critic of the Brotherhood.

Sarawy said young people grew disenchanted when the older Brotherhood leaders ruled in an exclusionary fashion, rather than working with non-Islamists. He also said youth were frustrated with the Brotherhood who chose to avoid direct confrontation when in power and never took on reforming state institutions like the police, which had become symbols of repression.

"They resort to half solutions rather than radical ones," said Sarawy. Many youth within the Brotherhood accuse its aging leaders of squandering their chance at power and subsequently opening the path to the bloody crackdown and harsh repression on the group's members. Thousands have died and even more have been jailed. Mass trials have become common place. 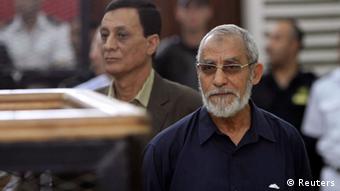 Mohammed Badie, the group's 71-year-old spiritual guide who has already been sentenced to three life terms by three separate criminal courts, is set to face a military tribunal on Monday, along with 198 alleged supporters of the Muslim Brotherhood. Badie and the others are accused of vandalism, inciting violence, murder, assaulting military personnel and burning two Coptic churches in the city of Suez.

"Especially post-coup, the rift [between young and old Brotherhood members] really, really widened because there was just so much blame to go around for why things ended up there," said a relative of prominent member of the Brotherhood who is currently imprisoned. The relative, who is not a member or supporter of the Brotherhood, asked to remain anonymous.

Leaders living outside of Egypt admit there is a generational gap within the group, but say it's not abnormal.

"I think there is the normal generational gap like in any society," said Abdullah El Haddad, who works at the Muslim Brotherhood press office in London, agreeing that the youth within the group were more willing to take risks. "The older generation of Brotherhood members is much more cautious and committing to the non-violent strategy, but all of them, they work under the same framework with the Muslim Brotherhood's ideology."

The groups' leaders living in exile have repeatedly said they are committed to non-violence, and condemn terrorist attacks when they occur in the country, but they admit that there are individual sympathizers and supporters that are not under their control. They blame state repression for causing the violence.

Egypt has carried out the first execution of a supporter of Islamist groups since Morsi's removal from power in 2013. Mahmoud Ramadan was convicted of throwing people off a building in the northern city of Alexandria. (07.03.2015)

Egypt's Administrative Court has suspended parliamentary elections scheduled to begin on March 22. The country's election committee is expected to set a new date for the polls. (03.03.2015)

Protesters at a women-only rally in Cairo have demanded an investigation into the deaths of dozens of activists, saying that they were killed by security forces. The rally was held despite Egypt's crackdown on dissent. (29.01.2015)

"The Abdel Fattah el-Sissi regime is trying to push them to commit violent acts on the streets, but we still see weekly peaceful protests," said Haddad. "This doesn't deny the fact that there are people who think about violent acts. Unfortunately, we've seen many atrocities against the offices of the police and the army, which is a very dangerous sign."

"The Brotherhood as a functional organization is never going to come out and call for violence, but they've clearly flirted with that violence and taken a more permissive attitude to violent initiatives that are taking place at a lower level on an individual basis," said Michael Wahid Hanna, a senior fellow at The Century Foundation, based in New York. "I think they've done this because, one, they probably can't control it, and two, if they were to be much more controlling, it would lead to fracturing within the organization."

With nearly all senior leadership jailed or living in exile and the organization not functioning in a normal way, Hanna said the group has been forced to evolve authority downward, with localized autonomy becoming a fact of life.

"This is seen as a necessary step to keep the organization functional and to stave off potential defections and people leaving," he said. "You also see this in the way in which they are dealing with the issue of violence."

And dealing with the generational gap and preventing disaffected youth from turning to violence as the government's crackdown continues has taken on a new urgency after the Egyptian militant group Ansar Bayt al-Maqdis pledged allegiance to the "Islamic State" last year. 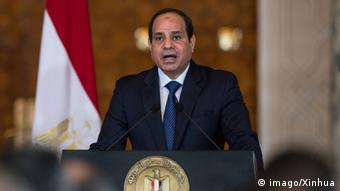 But while the generational gap within the Brotherhood has emerged as a challenge for its battered leadership, the problem is not exclusive to the group. In a country where two-thirds of the population is under 35 and successive regimes dominated by aging elites have resulted in three decades of political, economic and social stagnation, young Egyptians from the entire political spectrum have been lashing out at their parents' generation for doing nothing.

"It's a hierarchical country and there is a patronizing attitude towards youth, a real rigid idea about the proper place where youth and the less experienced people fit in," said Hanna.

El-Sissi's recent move to appoint new governors that included some younger figures was evidence that the government realizes to an extent that this is a problem, he said.

"They've tried to compensate for this, realizing the consequences of this are bad," Hanna said.