Egypt has carried out the first execution of a supporter of Islamist groups since Morsi's removal from power in 2013. Mahmoud Ramadan was convicted of throwing people off a building in the northern city of Alexandria. 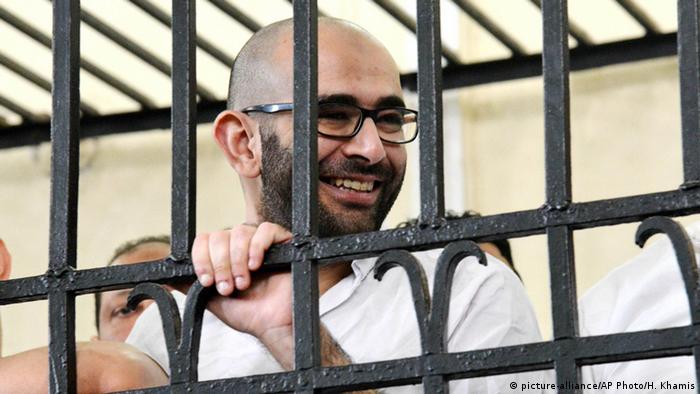 Mahmoud Ramadan was hanged on Saturday at 7 am (05:00 GMT), the interior ministry said. He was convicted of throwing people off a building during riots that followed the army's overthrow of Islamist president Mohammed Morsi.

Ministry spokesman Hani Abdel Latif said that Ramadan was the "first to be executed of those involved in violent clashes."

Hundreds of Morsi supporters have been sentenced to death after express trials, which the UN says is "unprecedented in recent history."

A court in Egypt's second largest city Alexandria had sentenced Ramadan and another Morsi supporter to death in 2014 after convicting them of throwing youths off an apartment block, killing one of them. They were among dozens of people put on trial over violence in the Sidi Gaber neighbourhood on July 5, 2013.

The deadly violence came as supporters and opponents of the elected president held rival demonstrations across the city.

An appeal court last month upheld Ramadan's death sentence. Under Egyptian law, the top appeals court has to confirm death rulings before they are carried out.

Dozens of Morsi supporters have been sentenced to death in recent months.

Following the wave of death sentences given out this week to over 500 Islamists in Egypt, two more men have been slated for the country's death row. The men were convicted of throwing youths off a roof. (29.03.2014)

Deadly clashes between Islamist protesters and security forces in Egypt

Protests by Islamists in Egypt have turned deadly, with at least 17 people killed in clashes between backers of ousted President Mohammed Morsi and security forces. Street battles took place in several cities. (04.01.2014)