Thousands of Palestinians have taken part in a funeral procession for a young female paramedic, who was shot dead at the Israeli border. Clashes have continued, with Israeli airstrikes and rockets from Gaza. 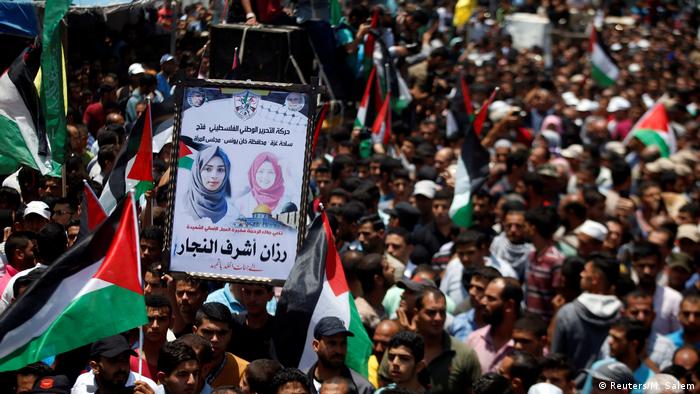 Thousands of Palestinians, many dressed in white medical uniforms, took part on Saturday in the funeral of a nurse who was shot dead at the Israel-Gaza border.

Razan Najjar, 21, a volunteer paramedic, was shot by Israeli troops near Khan Yunis on Friday, prompting outrage in Gaza.

Her father held her white, blood-stained medics' jacket as ambulances and medical crews took part in the procession.

The Palestinian Medical Relief Society (PMRC) said three other first responders were hit by Israeli fire on Friday and that Najjar was shot "as she was attempting to provide first aid to an injured protester."

"Shooting at medical personnel is a war crime under the Geneva conventions," the PMRC said in a statement. It called for "an immediate international response to Israeli humanitarian law violations in Gaza."

Clashes continued late Saturday, with Palestinian residents saying Israeli aircraft struck two militant sites in the Gaza Strip, hours after rockets were fired from the enclave at Israel. An Israeli military spokesman made no immediate comment.

The military had earlier said Gaza militants fired two rockets at Israel—one was shot down while the other fell short, with no immediate casualties reported.

Some mourners on Saturday called for revenge and, after the funeral, dozens headed to the border fence and threw stones at Israeli soldiers. The Palestinian Health Ministry said five protesters had been wounded by Israeli fire in response.

Since March 30, Gazans have protested at the Israeli border, demanding the return of land taken during the 1948 war. About 120 people have been killed in recent weeks, with Israeli being roundly condemned for using excessive force.

The United Nations envoy for the Middle East, Nickolay Mladenov, said in a tweet that "Israel needs to calibrate its use of force and Hamas need to prevent incidents at the fence."

The Israeli army said Saturday cases such as Najjar's "in which civilians are allegedly killed" by Israeli fire "are thoroughly examined" by an internal military committee.

The military said its troops operated "in accordance with standard operating procedures" and insisted that they only opened fire at instigators. It accused Hamas of using the demonstrations as cover to carry out attacks.

Hamas has organized the protests to draw attention to the decade-long Israeli-Egyptian blockade on the territory.

The jubilation that greeted the lavish opening ceremony of the controversial US embassy in Jerusalem was in stark contrast to the rising death toll reported from the Gaza Strip. Dana Regev collected eye-witness accounts. (14.05.2018)

Israel at 70: What does the future hold?

Israel celebrates its 70th anniversary this year under the banner "A legacy of innovation." But festivities have been overshadowed by tensions on the northern border. Tania Krämer reports from Jerusalem. (18.04.2018)