Rioters could also be made to report to authorities, Thomas de Maiziere has said. His proposal comes as German intelligence warned of a growing left-wing extremist scene on the back of last week's violence in Hamburg. 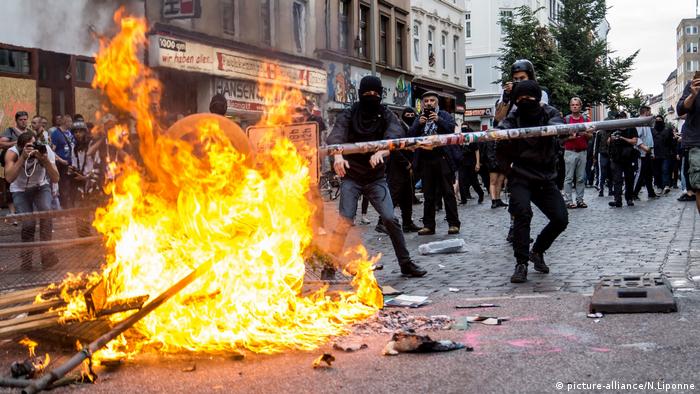 Germany's interior minister, Thomas de Maiziere, has outlined proposals designed to control potential rioters and prevent a repeat of the chaos and destruction seen on the streets of Hamburg during last week's G20 summit.

De Maiziere told Germany's Funke media group that those found guilty of rioting could be made to follow strict orders to regularly report themselves to authorities, especially before and during rallies. They could also be made to wear electronic tags.

"Rioters should not be allowed to even reach the demonstration spots in the first place," de Maiziere said, adding that German authorities had already introduced similar preventive measures against football hooligans.

Forcing rioters and hooligans to report themselves to the police was a "relatively mild" but "very effective," measure the German minister said.

As the leaders of world's 20 richest countries gathered in Hamburg last week, the north German port city was the scene of violent protests, as hundreds of activists looted shops, torched cars and battled with police.

On Saturday, Hans-Georg Maassen, the head of the domestic security agency Office for the Protection of the Constitution (BfV), warned of the growing threat posed by Germany's left-wing extremist scene. "We have in Germany a very strong left-wing extremist scene, made up of about 28,000 people, of whom 8,500 are prone to violence," Maassen told local media.

However, the Social Democratic Party (SPD) interior minister for the state of Lower Saxony, Boris Pistorius, warned against comparing leftist extremists with their right-wing counterparts. "There are twice as many criminal offences committed by right-wing extremists," Pistorius said. "And there are many more instances of bodily harm and even homicides committed by extremists from the right."

According to German intelligence, there have been around 1,200 violent offences committed by left-wing extremist groups, compared to the 1,600 offences by right-wing extremists.

Following the G20 in Hamburg, German authorities reported that around 500 police officers had been injured in the clashes with violent demonstrators.

However, those numbers were quickly disputed following an investigation by online news site BuzzFeed News, which found the number of police injuries during the actual summit protests to be markedly lower, at 231.

The initial number referred back to the number of injuries sustained during the whole of the G20 deployment, from June 22 to July 10, state and federal police later said. However, that toll also took into account dehydration and breathing problems caused by the high temperatures.

Several hundred hard-left activists have been making headlines in Hamburg for using a black bloc in clashes with police at the G20 summit. The protest tactic has a long history. (07.07.2017)

Merkel rival Schulz claims chancellor is too soft on Trump

Merkel's challenger for the chancellor's seat has called her out for going easy on the US leader. Schulz said Germany should not make concessions to Donald Trump, Vladimir Putin, and Recep Erdogan at the upcoming G20. (02.07.2017)