Environment ministers have gathered in Naples, but failed to implement more ambitious climate targets. The countries pledged only to keep global warming to well below 2 degrees Celsius. 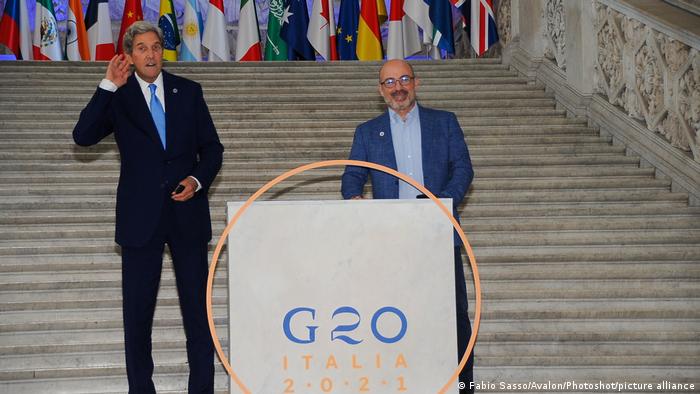 The G20 ministers responsible for climate, energy and environment failed to reach a consensus on more ambitious climate goals after talks in Italy on Friday.

The countries instead only pledged to aim for the less ambitious target in the Paris Climate Agreement of keeping the increase in the Earth's temperature to well below 2 degrees, while continuing efforts to reduce it to 1.5 degrees, a joint declaration said.

Global warming has already seen a 1.2-degree increase compared to pre-industrial times, with fatal climate consequences, such as heat waves, droughts, and floods.

Angela Merkel on climate change: 'We need to speed up our efforts'

Cingolani told reporters that concern over last week's deadly floods in Germany, Belgium and the Netherlands was at the forefront of discussions during the two days of negotiations in southern Italy. Germany and the European Union are both G20 members.

"All began by offering condolences," Cingolani said. Such natural disasters are "changing consciences."

Climate scientists say the link between extreme weather and global warming is unmistakable, while calling for urgent action.

Between them, the G20 countries account for some 80% of the world's gross domestic product and some 60% of the planet's population.

Merkel has warned that coronavirus restrictions may have to be reintroduced to curb a rise in cases. The chancellor also called for "patience" in the wake of last week's devastating floods.