Religious minorities in India have reported increased discrimination and violence since Narendra Modi took office in 2014. The pope wants to make an official trip to the South Asian nation, but has so far been shunned. 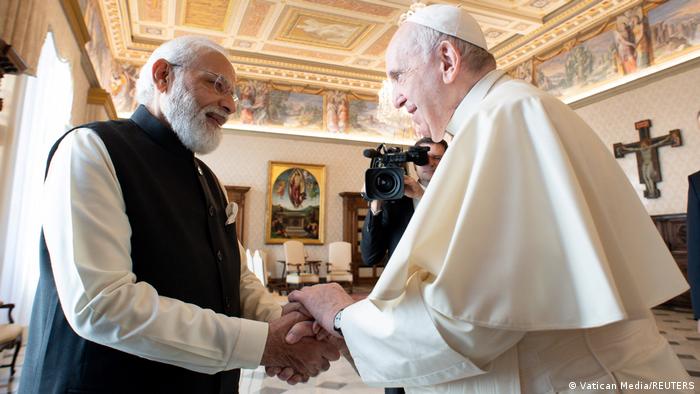 Pope Francis and Indian Prime Minister Narendra Modi met for the first time Saturday on the sidelines of the G20 summit in Rome.

India's news agency ANI cited sources as saying the hourlong talk at the Vatican covered "a wide range of issues" including fighting climate change and poverty.

Modi tweeted that the talks had been "warm" and that he had invited Pope Francis to make an official visit to India.

The last time a pope visited India's nearly 28 million Christian population was in 1999.

Catholic media reported ahead of the talks that previous Vatican requests for a papal visit had been rebuffed by New Delhi.

Saturday's meeting had been tipped to be a potentially thorny encounter as India has experienced increasing levels of discrimination against religious minorities since Modi, a Hindu nationalist politician, took office in 2014.

Francis was expected to call on Modi to step up efforts to crack down on religious intolerance.

India's population of 1.4 billion is made up of various ethnicities and religions. While the country has long been plagued by communal tensions, Modi and his Hindu nationalist Bharatiya Janata Party (BJP) are accused of fueling a rise in discrimination and violence toward people of other religions.

While Muslims, who make up around 14% of the population, have borne the brunt, Christians, who account for just over 2%, have also reported a rise in reported violent attacks.

More than 300 violent incidents have been recorded this year, according to a report by a group of NGOs released this month, under the pretext that Christians are seeking to forcibly convert Hindus.

The report said Christians face persecution from Hindu nationalist groups in 21 of the 28 states, most of them ruled by the BJP. 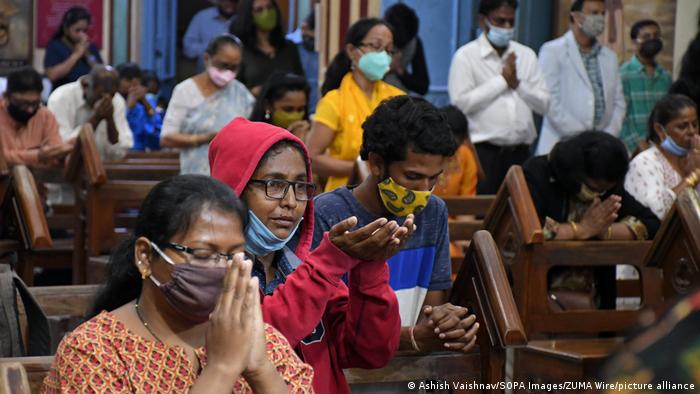 Christianity is India's third-largest religion after Hinduism and Islam, with approximately 27.8 million followers

The recent violence includes an attack earlier this month on a Christian prayer house in the northern state of Uttarakhand, which the local head of the BJP accused of holding "suspicious gatherings."

In March, a mob of Hindu radicals in the central state of Chhattisgarh attacked around 150 people in a church with axes, stones and wooden clubs. Eight people were seriously injured, according to reports.

In August in the same state, a mob of around 100 people beat up a pastor and vandalized his house. A month later, a crowd forced their way into a police station and assaulted a priest who was being questioned.

In recent days, Catholic bishops in India have demanded that the national and state governments take firm action against increasing persecution and violence against Christians.

At least three states run by the BJP have passed legislation aimed at preventing "forced conversion," and dozens of people have been arrested. Others plan to follow suit including the southern state of Karnataka, where priests have come out in protest.

The archbishop emeritus of Guwahati, Thomas Menamparampil, recently described the Hindu nationalist or Hindutva movement as "a vicious form of nationalism."

In the online magazine Indian Currents, he wrote that Hindutva and BJP along with powerful businessmen, "have developed the art of using religious and cultural symbols to mobilize crowds to win elections and promote their own interests."

The national debate now revolves exclusively around "what this club considers important: not development and welfare, but profits and privilege," Menamparampil added.

Modi's government has rejected having a Hindu agenda and insists that people of all religions have equal rights.

After the G20 gathering, Modi is due to leave for Glasgow to attend the COP26 climate summit.

Despite several steps in a positive direction, India's efforts are widely seen as a long way from the drastic measures needed to respond to the climate emergency.

Munawar Faruqui was detained following a complaint by members of a right-wing vigilante group in India. He was denied bail twice despite officials saying they had no video evidence of him "insulting" Hindu deities.