Munawar Faruqui was detained following a complaint by members of a right-wing vigilante group in India. He was denied bail twice despite officials saying they had no video evidence of him "insulting" Hindu deities. 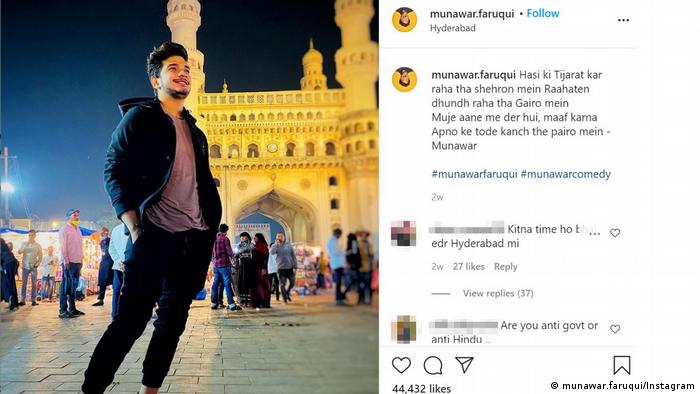 Indian stand-up comedian Munawar Faruqui is facing legal action in two states after he was arrested for allegedly insulting Hindu deities, in a case that critics say is an attack on freedom of speech.

Faruqui and four others were detained in India’s central city of Indore on January 1 after the leader of a right-wing vigilante group filed a complaint against them for hurting religious sentiments.

Eklavya Singh Gaur is the son of Malini Gaur, a politician from India’s ruling Bharatiya Janata Party. He said he and his associates were in the audience when the comedian made the objectionable remarks. They created a ruckus and forced the event to stop, local media outlet NDTV reported.

The 28-year-old performer has been booked on suspicion of outraging religious feelings and helping the spread of disease.

He has also been asked to appear before a court in the state of Uttar Pradesh over an earlier case of “insulting” Hindu deities as well as senior BJP leader Amit Shah, local news publication The Wire reported.

Nearly three weeks later, Faruqui has been denied bail by lower courts. His lawyers approached the Madhya Pradesh High Court last week but the hearing was adjourned after the police failed to produce the case diary.

Talking to NDTV, Faruqui's defender Anshuman Shrivastav said this was the result of police "negligence" and that the document was located in a police station across the street from the court.

Authorities are pursuing the case despite Indore police admitting they had no evidence, Indian Express reported.

"There’s no evidence against him for insulting Hindu deities or Union Minister Amit Shah," local police officer Kamlesh Sharma told the news daily days after the initial arrest. He added that the two videos submitted by the complainant were of another comedian.

Last week, Indore’s Superintendent of Police Vijay Khatri told news portal Article 14 that Faruqui was arrested after Gaur, son of the BJP politician, said he overheard some jokes during rehearsal. The lack of video evidence was not important.

"Doesn’t really matter," Khatri told the website. "There was ruckus at the venue even before Faruqui could perform. But, we were told [by the complainants] that they [the comedians] were cracking jokes about Ram and Shiv ji [the Hindu deities] while rehearsing."

Faruqui’s arbitrary arrest and prolonged detention have been criticized as an attempt to stifle freedom of speech in India. Fellow comedians and activists have come out in support of their colleagues.

"I think we need more satire and humour. Humour brings happiness in our lives. Humour is the best healer," Modi had said in the tweet.

Others, including popular comedians Rohan Joshi, Kaneez Surka and Abish Mathew, shared a video where Faruqui is trying to reason with those offended with his jokes.

"Turns out now you can just assault people while they’re doing their job and the cops will take 'them' to the police station," Joshi said on Instagram.

A jewelry advertisement in India showing a Hindu woman married into a Muslim family led to a fierce backlash from right-wing groups. But what is it like for a real interfaith couple amid rising intolerance?

The Indian web-series "Aashram" has created a stir after showing sexual abuse by Hindu holy men. Religious activists say depictions of sex and drug abuse by holy men discredit Hinduism, but is that true?

Is India's Gujarat providing a model for 'Muslim discrimination'?

As Hindu nationalism grows in India, some experts say the ruling BJP's policies and practices in Gujarat state have served as a model for "systemic, nationwide discrimination."