The "Welcome to Hell" protest was over shortly after it began, following a day of suspense in Hamburg. Many people had stayed at home or left the city. But, as Jenny Witt reports, almost everyone had expected trouble.

All day, Hamburg held its breath. With just 24 hours to go until the start of the G20 summit, the usual traffic noise died down. An eerie silence ruled in the city center, only punctuated by the sound of passing police helicopters. It was a silence most people knew would end by the time the evening came.

Thursday's big demonstration against the summit, titled "Welcome To Hell," was the first serious test for the police. Flyers from the organizers instructed people to "be noisy, angry and combative." The police knew that this would be the first proper gathering of the "Black Block" - the extreme anarchist end of the anti-capitalist movement.

Seventy-six officers were injured in the subsequent clashes, five of whom had to be taken to hospital.

Police officers have saturated the district around the Messehallen convention center for days now. Streets are blocked off. Hundreds of police vans from all over Germany line the pavements. Water cannon have been stationed around the city all week. The central part of Hamburg has been transformed into a fortress, despite statements by the city government that this was not supposed to happen.

On Thursday, the atmosphere turned oppressive. In the empty streets, tourists and locals photographed the anti-G20 graffiti and the boarded-up shops. Many families have left the city for a long weekend. On some of the arterial routes, the remaining rush hour traffic was held up in big jams due to the passing convoys of the dignitaries, or because the police had blocked off streets.

Nonetheless, thousands of people turned up for the protest march. They were of all ages, from babies to pensioners. The organizers expected around 10,000 demonstrators. Some had come dressed in black, but many more did not fit the cliché of the habitual demonstrator. There were women and men, locals and tourists, people in shirts and others in workwear.

As the temperatures rose, the old fish market turned into a concert venue, a banner-making workshop, a meeting point. There were speeches, food and music.

Suddenly, a loud cheer erupted in the crowd. A small boat with half a dozen people passed by below the quays, with an anarchist flag fluttering in the breeze. It circled three times, then disappeared upriver.

Dirk Mirkow, who was dressed as an "armed uprising," carrying a toy gun and a placard in front of his body, said he was there for many reasons. 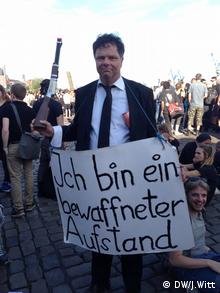 "For example because Donald Trump denies climate change. And because the richest eight men own as much as a large percentage of the world's population."

A man and woman in their 50s said they felt the G20 should not meet in a city like Hamburg. "I don't feel that anything will come out of the talks," said the woman. "These meetings have happened for years and climate change is continuing nonetheless."

She said she was not worried about violence later in the evening. "These are things that are talked up. If the police stayed in the background a little more, this would not happen anyway." Her friend said he was worried about provocation on the part of the police. "I'm here to defend our democratic right to assemble," he said.

There was a huge police presence around the market square. The rows of vans, water cannon and officers in heavy riot gear stretched in all directions, as far as the eye could see. When about 100 officers suddenly marched through the crowd along the waterfront, the atmosphere tensed immediately but there were no physical confrontations. 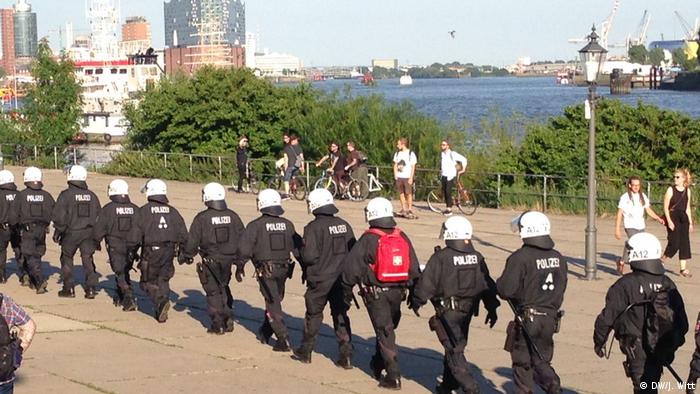 On the short-lived march

Soon after, the organizers started the march. Several hundred demonstrators in black, many of whom wore hoods and had covered their faces, led the way. They moved about 400 meters (1300 feet) down the road, toward a footbridge that passes overhead.

That's where the demonstration ended. A row of water cannon became visible in the distance, with their blue lights flashing. The police were stopping the march, just as many had expected.

A police announcement echoed off the walls of the Hafenstrasse, the old squatters' street: people were ordered to remove any face coverings or the police would take action. Bystanders were told to leave the area.

As it unfolded: DW's live updates of the protest and clashes

More officers arrived from all sides. People on the march and the walkway above became increasingly nervous. More police officers with pepper spray canisters and protective gear took up position in the crowd. "They look like Darth Vader," said a man.

It was only a matter of time before things would escalate. People realized that they would be surrounded. Many left via small side streets, but hundreds stayed in the main march. When the water cannon began to drench the crowd and the police began to use pepper spray, it was exactly what many had thought would happen.

"They were never going to let the demo get anywhere near the city center," said another protester on the footbridge above the water cannon. "That's the start of three hot days in Hamburg."

Opinion: Planned G20 protests will have little effect in Hamburg

For weeks, chatter about the demonstrations accompanying the G20 summit in Hamburg has approached hysteria. But the summit is not a good target for those who actually want to achieve something, says DW's Bernd Riegert. (06.07.2017)