US President Donald Trump has arrived in Germany ahead of the G20 summit in Hamburg and met with Chancellor Angela Merkel. Large anti-capitalist demonstrations have already resulted in clashes with security forces.

- A major "G20: Welcome to Hell" protest by anti-globalization activists began in Hamburg as the port city started welcoming leaders of the Group of 20 top industrial and developing economies.

- Trump faces the possibility of isolation over his withdrawal from the Paris climate accord, and his "America First" policy.

20:46 Authorities in Hamburg have published an official statement on the events of the past hour. According to the press release, police tried to separate about 1,000 hooded far-left protesters from the other marchers in order to ensure that the demonstration remained peaceful. The masked activists refused to comply, and became aggressive with officers, resulting in the use of water cannons and tear gas.

Officers also reported rioting in the Altona and St. Pauli areas of the city, including property damage and burning cars. DW reporters captured this video at the scene:

20:25 The Hamburg police's official Twitter account says that the protest organizers have called off the rest of the march:

20:07 Security services have begun firing water cannon at protesters who have refused to comply with an order to remove face coverings and who have tried to continue their march through a police barricade. Hamburg police tweeted that protesters were throwing "bottles and objects" at them.

19:53 DW reporters on the scene in Hamburg say that the first clashes between police and demonstators have begun in the Welcome to Hell anti-capitalist protest after a number of far-left protesters refused to remove their masks.

19:40 The police have asked "non-participants" to disperse from the protest area as officers and masked demonstrators remain in a standoff. However, there 100 journalists standing between the two groups, making the situation even more tense. 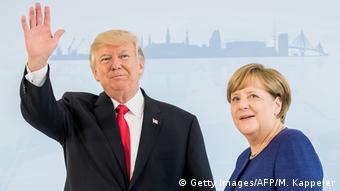 Trump and Merkel talked for an hour, her spokesman says

19:35 German Chancellor Angela Merkel's spokesman Steffen Seibert said that she and President Trump discussed North Korea, the Middle East and the conflict in eastern Ukraine during their closed-door talks on the eve of the summit.

19:25 DW's Rob Mudge is also reporting from Hamburg. Here are his intital impressions of the city: G20: Hamburg's calm before the storm

19:20 DW's Jenny Witt reports that police have blocked Welcome to Hell protesters after only about 300 meters (1000 feet) of marching. The demonstration was supposed to continue into the city center from the Fischmarkt area. Police are reacting to protesters refusing to remove their masks.

19:00 The left-wing Welcome to Hell protest is underway in Hamburg. Police estimated that 6,000 people were taking part in the left-wing demonstration, which organizers have vowed to use to disrupt the summit. According to DW's Max Hoffmann, far-left "Black Block" activists were preparing to join the protest, and asking the press not to take photos of them for fear of retribution.

18:40 The mood is a little more tense now, according to DW's Jenny Witt, with police deploying through the crowd gathered for the Welcome to Hell protest.

18:19 A joint statement from the World Trade Organization, International Monetary Fund, and World Bank calls on the G20 leaders to reinvigorate trade and find better ways to support workers.

18:12 DW's Max Hofmann says the feeling at the Welcome to Hell protest is that of a large family gathering. Those assembled are a mixed bag politically, he says. "If you're looking for a common denominator here it's anti capitalism, anti-globalization and, of course, anti-Donald Trump."

Read: Who's who in Hamburg's G20 protests

Some shops have put up signs saying "No G20" in solidarity with the protesters, says Hofmann, speculating that they may hope this means businesses won't be damaged.

18:08 Chancellor Angela Merkel and Donald Trump have entered the Hotel Atlantic in Hamburg, for a summit sidelines meeting.

DW's Melinda Crane says the handshake will be a major focus of the meeting: "They had a very difficult non-handshake moment when she visited Washington in the spring so, of course there's going to be a lot of focus on the handshake when she meets him at the hotel."

17:40 Police are braced for a major protest with about 20,000 officers on hand. The Welcome to Hell protests starts moving at 7 p.m. but the entertainment is already underway, says DW's Jenny Witt.

17:25 Merkel says she sees various options for resolving climate policy differences at the summit in Hamburg that she is hosting.

Merkel told reporters that it was her role to find compromises. Regarding climate policy, she added: "There are various options, which can be discussed."

However, Merkel said she did not see herself as a mediator between Trump and Putin. "We have clear positions on issues like Ukraine."

16:15 Trump arrived in Hamburg on Thursday, ahead of the G20 summit and his planned meeting with Russian President Vladimir Putin. The US president paused to wave as he descended the steps of Air Force One with wife Melania. He faces the risk of isolation over his decision to pull out of the Paris climate deal and a drift towards economic protectionism as part of his "America First" policy.

On the sidelines of the G20, Trump was due to have his first face-to-face meeting with Russian President Vladimir Putin. The encounter will be particularly closely watched amid accusations that Russia meddled in the US elections.

Earlier in the day, Trump had praised Poland for its commitment to defense, and condemned Russia's actions in Ukraine.

US President Donald Trump spoke with German Chancellor Angela Merkel ahead of the G20 summit in Hamburg. Merkel earlier downplayed expectations Europe and the US could overcome deep differences. (04.07.2017)

Trump calls on NATO members to contribute 'their fair share'

NATO members are hoping to appease US President Donald Trump with firmer plans to increase national defense spending. Trump has once again urged NATO members to pay more, saying 2 percent of GDP was the minimum. (25.05.2017)