The European Parliament had called on the EU to downgrade its attendance of the Saudi G20 over human rights abuses. The EU has defended its decision to participate, citing the need for coordination on the pandemic. 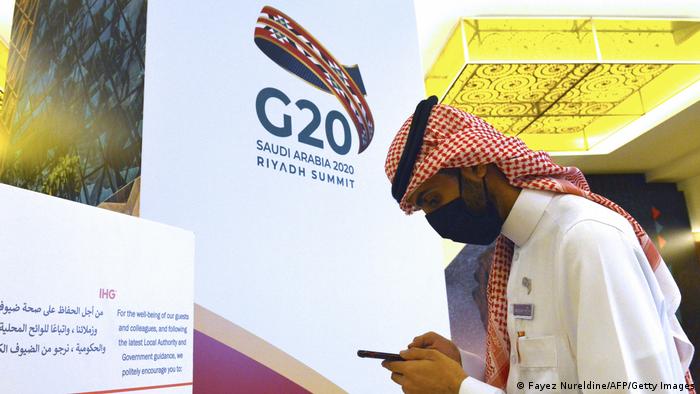 Members of the European Parliament last month called on the European Union to downgrade its attendance at the summit in Riyadh over ongoing human rights violations in the country.

The bill was one of the strongest political messages the institution had ever issued on Saudi Arabia and came on the two-year anniversary of the killing of journalist Jamal Khashoggi.

However, von der Leyen and Michel ignored the calls, and are at the virtual summit, which began on Saturday.

MEPs received a letter from von der Leyen and Michel on Saturday, which defended the decision.

The leaders said the summit is "a key forum to discuss and coordinate with the largest world economies the major global challenges we face. Such global coordination is all the more important as the world faces one of its deepest crises with the COVID-19 pandemic."

EU 'could not be absent'

They said the EU could not be absent from the summit, which will address global cooperation on COVID-19 vaccines, preparedness against future pandemics, climate change, sustainable recovery, as well as trade and taxation issues.

"Participation at a G20 meeting does not mean endorsement of the policies of the Chair," they wrote.

"This being said, the promotion and protection of human rights are at the core of the EU's engagement with Saudi Arabia.

"The situation of women's rights, individual activists, human rights defenders, or the need for accountability for the killing of Jamal Khashoggi, feature prominently in our discussions with the relevant Saudi institutions.

"It is our intention to further intensify our dialogue on all human rights topics including civil and political rights, with the aim of mirroring progress Saudi Arabia has achieved in recent years in the socio-economic domain. We will continue to pay utmost attention to this question in the run-up to the G20 Summit and beyond, in coordination with the EU Special Representative for Human Rights and relevant stakeholders."

Separately, the Commission defended its participation in comments to DW, saying it was too important not to attend.

Peter Stano, lead spokesperson for the external affairs of the EU, told DW: "We have been raising our concerns and we discussed further how to improve the human rights situation — the protection of human rights in the kingdom — and we will continue to pay upmost attention to this question."

A foreign policy expert in the Parliament told DW that the letter showed the gulf between the institutions of the EU, and that the parliament had once again shown itself to be more representative of the public's views.

They said the virtual nature of the conference gave the Commission and the Council a sort of "alibi" to hide behind.

MEP Marc Tarabella, Vice-Chair of the Delegation for relations with the Arab Peninsula, told DW that the EU was turning a blind eye to human rights abuses in Saudi Arabia.

"The European Commission and the Council are clearly turning a blind eye — not only to the horrendous record of human rights violations in Saudi Arabia and to the European Parliament’s clear request for a participation downgrade — but also to all the NGOs, journalists like Jamal Khashoggi, human rights defenders like Loujain al-Hathloul and the women’s activists that risk their lives every day."

"The EU has lost a big opportunity to be coherent with its values."

Tarabella said the EU's "silent diplomacy" was failing to reign in human rights abuses in the country and called for concrete measures against the Saudi regime.

"War crimes against civilians in Yemen, lack of accountability for the state-sponsored murder of Jamal Khashoggi, torture and rape against dissidents, including human rights defenders and women rights activists, go unabated, with no sanctions from the EU of any sort."

"It is high time to take a clear, public stance consistent with the EU values and interests and impose real costs on the Saudi regime for its reckless, criminal behavior."