The German chancellor has called for greater efforts in securing an affordable vaccine across the globe. Despite a pledge made by G20 leaders, she said she was still concerned that no formal agreements have been struck. 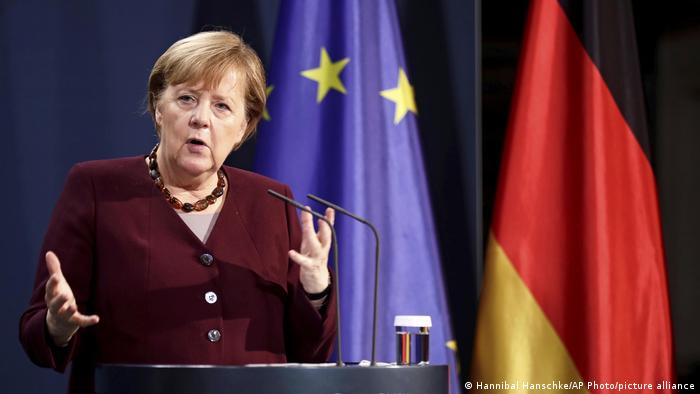 German Chancellor Angela Merkel said she is worried that efforts to roll out an affordable coronavirus vaccine are moving along too slowly, as she spoke from Berlin at a virtual G20 summit.

Although G20 leaders said on Sunday that they would "spare no effort" to ensure fair distribution of vaccines, Merkel said she was concerned that no major agreements had yet been struck for poorer nations, even as wealthy countries have already purchased large numbers of doses from pharmaceutical firms.

"We will now speak with [global vaccine alliance group] GAVI about when these negotiations will begin, because I am somewhat worried that nothing has been done on that yet," she said.

"The most important thing now is that COVAX uses the money it has to negotiate with the manufacturers of potential vaccines," she said, referring to the COVAX global vaccine effort. "Just having money in the account is not enough. It must also result in something for the developing countries."

Merkel noted that the European Union, the United States and other rich nations had already secured deals to vaccinate their populations. However, a global initiative to ensure access to tests, treatments and vaccines for all is facing a €3.8 billion ($4.5 billion) funding gap.

With a vaccine, is the pandemic under control?

Germany has committed €500 million so far to the COVAX global vaccine effort, which is being co-run by Gavi, the Coalition for Epidemic Preparedness Innovations and the World Health Organization.

"We have mobilized resources to address the immediate financing needs in global health to support the research, development, manufacturing and distribution of safe and effective COVID-19 diagnostics, therapeutics and vaccines," said the G20 leaders in their closing communique.

"We will spare no effort to ensure their affordable and equitable access for all people."

Michel has proposed establishing firm international cooperation on pandemics in order to be able to react faster in a more coordinated way. Regarding lessons learned from the pandemic, Merkel said it's clear that economies should be more sustainable to withstand similar crises, both financially and from a climate perspective.

Read more: Opinion: Amid coronavirus, democracy is at stake

Merkel also called for the strengthening of the World Health Organization, which has led much of the global effort to curb the pandemic.

The German chancellor praised the G20 meeting, saying that the final declaration exemplifies the "spirit of multilateral cooperation" in the face of a global challenge that could only be responded to by all actors.

The two-day summit of heads of state was held virtually due to the coronavirus pandemic, which has killed more than 1.38 million people around the world.

Coronavirus vaccine: Pfizer, BioNTech seek emergency use in US

Days after Pfizer and BioNTech announced that their coronavirus vaccine appeared to be 95% effective at preventing COVID, the company has reached out to US regulators to allow emergency use of the vaccine candidate.