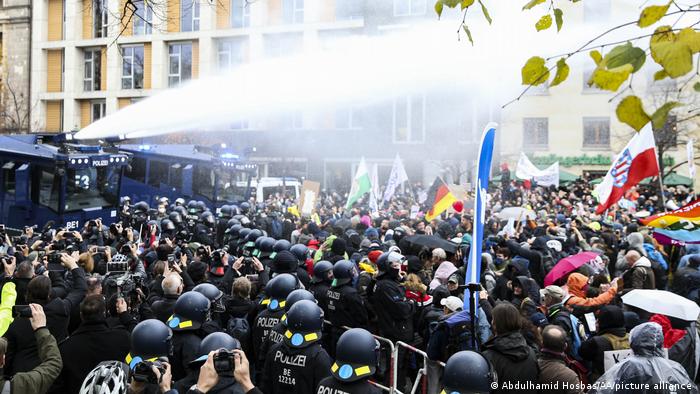 Wednesday's heated debate on changes to Germany's infection protection law went on for two hours. Meanwhile, on the streets outside the Bundestag, several thousand angry protesters also made their voices heard. Denouncing the measures put in place to curb the spread of the pandemic, they called for the storming of parliament. Police in riot gear had to resort to a water cannon to break things up, sparking scenes not witnessed in Germany in decades.

Since March, the German government — like other governments all over the world —has been struggling to deal with the COVID-19 pandemic. It has introduced concrete measures to contain the virus, calling on people to wear face masks and banning gatherings in public spaces. It has imposed restrictions on cultural life, on the food and catering industry, on hotels and also on places of worship.

These measures have been annoying and painful for almost everyone — and some have also seen them as a violation of their fundamental rights. On Wednesday, demonstrators — among them COVID-19 deniers and supporters of the right-wing populist Alternative for Germany (AfD) — went so far as to compare the government's proposed measures with the Enabling Act of 1933 which paved the way for Hitler's dictatorship.

For such a term to be used is outrageous. The act, which effectively gave the chancellor powers to bypass the government and enact laws on his own, symbolized Germany's complete departure from democracy. Those politicians who resisted, Social Democrats and Communists, were later persecuted and, in some cases, murdered.

Some AfD lawmakers, including Petr Bystron, joined in the demonstrations outside before the parliamentary debate. Bystron also referenced the Enabling Act and said 1933 was a "good comparison." He likened the government's face mask legislation to the Nazi laws that banned Jewish people from shopping in certain stores, and said he thought such comparisons were justified.

Christoph Strack is a DW correspondent based in Berlin

This rhetoric is nauseating and cynical toward those who suffered under the Nazi dictatorship. It's an insult to all the Jews who were persecuted and murdered.

It's also an affront to the founding consensus of our democracy, and offensive to those democratically elected politicians who are struggling to cope with the pandemic.

Bystron's response shows that right-wing populists are less interested in democracy than in scoring political points off the tumultuous mix of far-right extremists, conspiracy theorists and people who are simply suffering.

Parliamentary debate is part of democracy and Wednesday's Bundestag debate was one of the year's most exciting discussions, even though the AfD made more noise than proper arguments. But the strongest speeches did not come from the ranks of the coalition government. That was left to Christian Lindner, leader of the pro-business Free Democrats (FDP) and, in particular, Jan Korte, leader of the Left party's parliamentary group, who had insisted that lawmakers be given more freedom to participate in the debate.

Both highlighted various details to show which changes to the law had been achieved in the short time allocated to discussion, and what might have been achieved had there been more time. Both also reminded their audience of the fundamental importance of opposition in politics. It might be practical to have a grand coalition in times of crisis, but this country needs a stronger opposition.

After the debate, the law was passed by both houses of parliament and then sent to the president for his signature. But despite these changes, Germany's democracy will remain the same: there will still be pandemic fatigue, and there will still be despair over which measures should be taken to curb the spread of the virus. And the country will still have the same health care system, where medical workers will continue to be overworked and overstretched.

On Tuesday alone, 14,419 new infections were recorded in Germany, along with at least 267 deaths. The situation remains serious, as is the political response.

What the protesters on the streets and the right-wing lawmakers in parliament have to offer is bleak. The debate surrounding the COVID-19 response has deteriorated and is getting uglier. Our democracy is at stake — but it will survive.

Berlin's restaurants and bars have been closed for two weeks now, as Germany's "lockdown light" reaches its half-term mark. But despite promises of financial assistance, the outlook is grim.

'Doomsday Clock' remains at 100 seconds to midnight 0m ago

Serbia cancels plan for lithium mine following protests 4h ago