Ilkay Gündogan and Emre Can have embroiled themselves in a row over a controversial military salute celebration. The German internationals liked an Instagram post featuring Turkey players that is thought to be political. 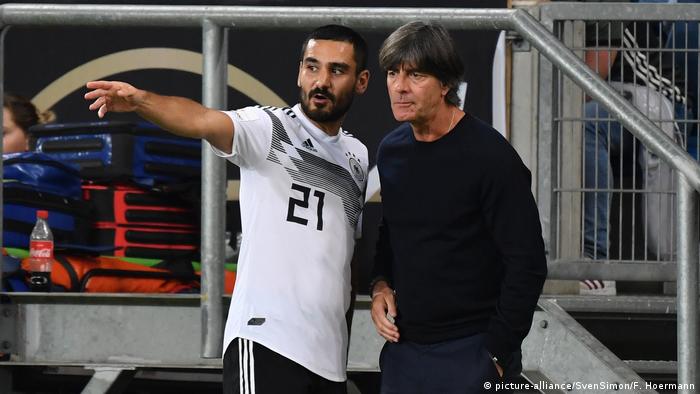 Germany players Ilkay Gündogan and Emre Can have found themselves mixed up in the contentious debate over a military salute celebration performed by Turkish international footballers, after the pair both liked an Instagram post showing the celebrations.

The two German-born players both have Turkish roots and have since taken back their 'likes' and denied they were in any way showing support for military action. Can said he was "an absolute pacifist and against any kind of war."

The salute was believed to have been in support of Ankara's armed offensive against Kurds in Syria and confirmed in a Twitter post from the Turkish FA.

The FA tweeted a post-match celebration photo of the players saluting once again and dedicating the victory "to our brave soldiers and fellow martyrs."

Turkey forward Cenk Tosun, who plays club football for English Premier League side Everton, later posted on Instagram a photograph of the military salute and the words "For our nation, especially for the ones who are risking their lives for our nation."

"I took the like back when I saw it was considered political," Gündogan told German football magazine Kicker. "Believe me, after the last year, the last thing I wanted to do is make a political statement."

Both players were named in Germany's starting lineup for their European Championship qualifier against Estonia on Sunday. And the public backlash has already started, with critics posting comments on Gündogan's latest Instagram post, and on Twitter, with the hashtag #freekurdistan.

With German Chancellor Angela Merkel urging Turkish President Recep Tayyip Erdogan to immediately stop the country's military offensive in Syria, the Germany internationals' actions will be a hot topic in their homeland. Gündogan courted criticism in May 2018 for posing for a photo with Erdogan alongside Tosun and Mesut Özil.

Over the weekend, tens of thousands of demonstrators marched through German cities protesting Turkey's military operation.

"Personally, I have not seen this gesture, which could be considered a provocation," UEFA's head media officer Philip Townsend told Italian news agency ANSA.

"Does the regulation prohibit references to politics and religion? Yes, and I can guarantee you that we will look at this situation."

FIFA, football's world governing body, fined Swiss players Granit Xhaka, Xherdan Shaqiri and Stephan Lichtsteiner for celebrating goals with a pro-Kosovo double eagle gesture during last year's World Cup. It was deemed to be a political gesture that "infringed the FIFA disciplinary code for unsporting behavior contrary to the principles of fair play."

An injury-hit Germany side have called for 'full focus' heading into their EURO 2020 qualifying clash with Estonia knowing they can't afford to drop further points in Group C. Follow all the buildup in DW's live blog! (13.10.2019)

Germany vs Estonia: Neuer, Gündogan and Reus set to return as Löw turns to experience

Germany are in the Estonian capital of Tallinn preparing for their next European Championship qualifier. Having fielded a young, experimental team against Argentina, some familiar — and older — faces are set to return. (12.10.2019)