Israeli PM Netanyahu is tired of being badgered by the US and EU about the humanitarian plight of the Palestinians. So he is turning to countries like Russia, India and China, whose priorities may differ somewhat. 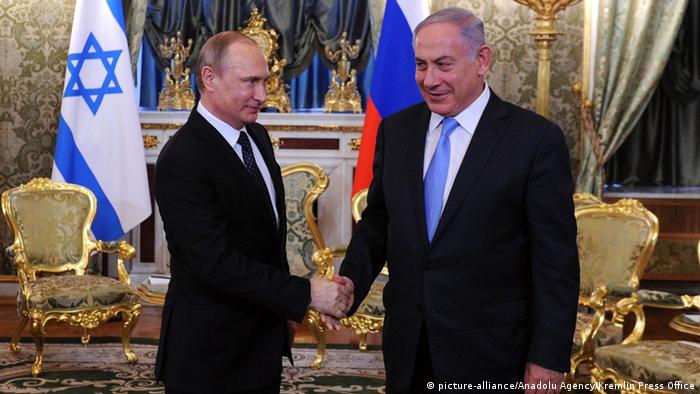 Israeli Prime Minister Benjamin Netanyahu visits a Jewish community in Moscow on Wednesday. It's among his last appointments during a two-and-a-half day visit to Russia, which included a meeting with Russian President Vladimir Putin for the fourth time in the past year. That's three more times than he has met with US President Barack Obama during the same period.

Netanyahu is cozying up to the Kremlin chief at a time when relations between Russia and the West are at one of their lowest points since the collapse of the Soviet Union in 1991.

Despite Israel being the largest recipient of US foreign aid - more than $3 billion (2.65 billion euros) per year, much of it military - Netanyahu appears to have few qualms with engaging a country currently facing US and EU sanctions for Moscow's annexation of the Crimean Peninsula in 2014, and its role in the continuing separatist movement in eastern Ukraine.

Ostensibly the meeting is to mark 25 years of renewed diplomatic relations, which the Soviet Union severed during the Cold War, after siding with Arab countries during the 1967 Arab-Israeli War.

The two leaders are also discussing various military and security issues, exploring trade opportunities and possibilities for enhancing cultural ties. But not all international leaders would meet four times in a year to iron out such details.

Underlying Netanyahu's burgeoning relationship with Putin is the prime minister's strained - if not acrimonious - relationship with Obama. Netanyahu is highly critical of the US-led nuclear deal with Iran, which he labels a threat to Israel's security. 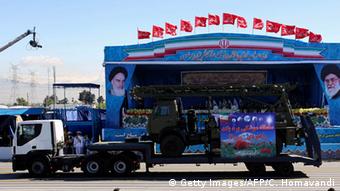 Russia also has close ties to Iran, this S-300 missile defense system was provided to Tehran by Moscow

The deal requires Iran to give up any ambitions it may have harbored of building a nuclear weapon. In exchange Tehran is allowed to pursue a nuclear power program, and has had crippling sanctions lifted.

The agreement hinges on what the Obama administration describes as the most comprehensive inspection and monitoring system ever imposed, plus the threat of sanctions "snapping back" if Iran is found in breach of the deal's terms. Assurances from Obama and some nuclear experts have done little to sway Netanyahu.

David Makovsky, a Middle East expert at the Washington Institute for Near East Policy, said Netanyahu and Putin may have legitimate security issues to discuss, but he added: "They clearly have a good rapport. Better with Putin than with Obama."

Plight of the Palestinians

Beyond the nuclear deal with Iran, Netanyahu has exacerbated tensions with the US and the European Union with his handling of the Palestinian question.

A burgeoning campaign known as BDS, for link:18506073:Boycott, Divestment and Sanctions has taken root, and nowhere more so than in Europe# - which remains Israel's largest export destination. But Netanyahu was incensed when new EU guidelines came out late last year calling for labeling goods grown or manufactured in the occupied West Bank.

Since then Netanyahu has sought to bolster Israel's relations with other major economies like Russia, India and China.

If chafing at US and EU demands for human rights adherence is what is driving the Israeli prime minister into the arms of the Russian president, be assured that the Kremlin is also seeking to capitalize on this fledgling friendship.

More risk for Netanyahu than Putin

One of Putin's main objectives has been to make Russia strong, again, in the world of geopolitics - preferably an out-and-out superpower. He rode high oil prices to develop the Russian economy and bludgeon his political opponents until prices nose-dived two years ago.

Since then he has sought to advance Russian interests in Crimea, eastern Ukraine and Syria. His military support for Bashar al-Assad's regime appears to have made him indispensible in determining Syria's future - whatever that may be.

"For Russia they learned the hard way in the 1970s and 80s, when they were arming Egypt and Syria, that because they had no relationship with Israel it meant that they dealt themselves out of [Middle East] diplomacy," Makovsky said. "For Russia there's a lot of value to try and have as many friends in the Middle East as they can."

Both Putin and Netanyahu figure to gain from this new relationship. The difference is that while the boss of the Kremlin has virtually nothing to lose, the same cannot be said of his Israeli counterpart. Mekelberg says the prime minister is playing with fire.

"The risk for Netanyahu is compromising relations with the United States. He risks crossing the line," Mekelberg said. "At the end of the day the US supports Israel militarily, economically and politically in a way that Russia will never do."

With neither Israelis nor Palestinians present, diplomats in Paris have sought to lay the groundwork to rekindle a Middle East peace process. They called a two-state solution "the only way to achieve an enduring peace." (03.06.2016)

Despite efforts by some groups to punish Israel economically for its continued occupation of the Palestinian territories, business is booming. Daniella Cheslow reports from Jerusalem. (10.06.2015)