From timber to timbre: Violin-makers sound out Germany | Business | Economy and finance news from a German perspective | DW | 24.08.2021

From timber to timbre: Violin-makers sound out Germany

The eastern German town of Brandenburg hosted an international workshop for violin-makers. It took a Canadian living and working there to stage the event, which sounded promising right from the start. 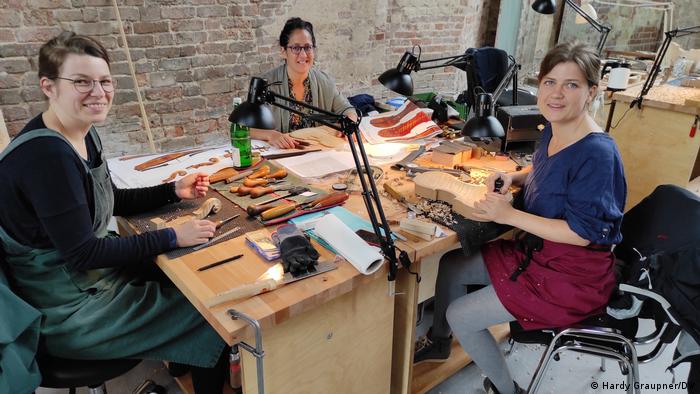 Working on a sophisticated musical instrument together can be great fun

It would be an unusual scene for any downtown church in Germany. Imagine the main hall filled with tables and workbenches. A motley crew of people sitting around them, bending over woodworking tools and focusing on the delicate, ancient craft of making cellos, violins and bows.

Yet this unlikely scene is exactly what happened throughout last week in St. John's Church in the eastern German town of Brandenburg an der Havel, some 80 kilometers (50 miles) west of Berlin.

A group of 25 people from 11 nations descended for the town's first European one-week workshop on violin-making to exchange ideas and the tricks of their trade.

Some participants in the Brandenburg workshop had known one another from a traditional and larger workshop in Oberlin, in the US state of Ohio, but there had long been a wish among European craftspeople to meet up somewhere closer to home.

"[Oberlin] is a great event, no doubt," a young female violin-maker from Hanover, Germany, told DW. "That's all fine, but to have something like this in Europe is just wonderful," she said.

"We get so much inspiration from workshops like these; it's been great fun and absolutely helpful for our work, with so many details being important in our trade," another young woman at the same table — half Italian, half German — said.

"We talk about the making of our instruments here, and we are working together on joint projects and share our ideas," a Cuban violin-maker based in Switzerland said. 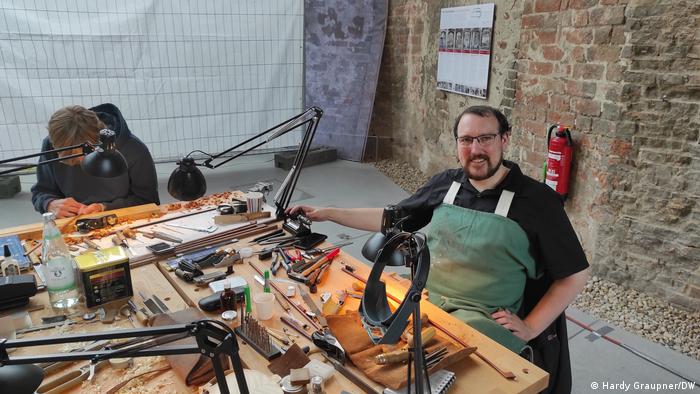 Niall Flemming, an Australian-born bow-maker living in Ireland, told DW that he was delighted that the workshop in Brandenburg an der Havel finally became a reality, pointing out that for Europeans it offered many practical advantages.

"I came here from Brussels on a train with my tools. I don't have to worry about going through airport security with knives and chisels. Plus it's more affordable than a trans-Atlantic journey," Flemming said.

A Canadian to the rescue

The man who made all of this possible is Ian Crawford McWilliams, a Canadian from Saskatchewan. For the past decade or so he has been a proud inhabitant of Brandenburg an der Havel.

"I started out as a cabinetmaker from a very young age; it was a passion for doing woodworking," McWilliams recalled. "I was working in shops in Canada where I would stand at a machine all day long and that really wasn't what I wanted, so I later came to appreciate the violin-making craft."

After stopovers in England and France, he finally settled down in Brandenburg together with his family, where he found "some space for my woodworking job separate from our house."

Now, several years into his new career, the Canadian gets some €14,000 ($16,400) per violin or viola and about €28,000 for a cello. He's sold his instruments to musicians in Germany, Switzerland, North America and other places.

In cooperation with the church and the local authorities, McWilliams managed to stage Brandenburg's first workshop for fellow European-based craftspeople — an event that he said was not meant to throw the gauntlet to the organizers of the Oberlin workshop in Ohio.

"Many people here in Europe can't make it over there for various reasons. It's so far away, an expensive journey, and with COVID as well," McWilliams said. 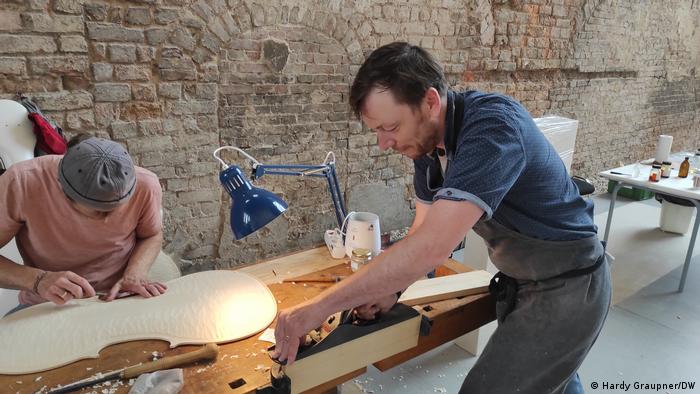 Ian Crawford McWilliams (r.) is glad his workshop has been a success with participants

"I think the location here in Brandenburg is just amazing. We can use this space in the church, and we have our accommodation together — you don't want everyone to stay in hotels all around town, but here everyone is together, we live together, cook together and that creates an atmosphere that bonds people together," he said.

The Canadian violin-maker enjoys working on joint projects during the workshop. Talking to his colleagues is an added bonus.

"And later over a beer you continue these useful talks," he said. "There's a social side to it, and you get information from people who meet in a relaxed setting."

Let's do it again

The response has been overwhelmingly positive, encouraging McWilliams to turn the Brandenburg workshop into an annual event.

"Hopefully, if it runs again and I'm invited again, there will be more bow-makers and we have the opportunity to talk trade and talk about how we do things," said Flemming.

"There's at least three major schools in bow-making: German, English and French," he said. "I'm in the French school, and other guys do it differently and have other processes, so there's a lot to learn again next time around."