Every year thousands of refugees die trying to reach Europe. Among them was Mati Ofore, who drowned last week off the coast of Italy. His brother, Johnson Ofore, has already made it to Berlin and spoke to DW.

The day Mati Ofore boarded a heavily laden boat bound for Europe, his older brother Johnson Ofore could not get hold of him. Johnson had wanted to try once again to persuade Mati to at least delay the dangerous crossing and to look for work in Libya instead.

Johnson looks down. His brother drowned: Mati was one of hundreds of refugees whose overloaded boat capsized near Lampedusa last week. More than 270 refugees died. Every day, people desperate to escape war, poverty and a lack of prospects in their own countries attempt to reach Europe by sea. How many of them lose their lives on the journey in overloaded, unsafe boats, remains unknown. 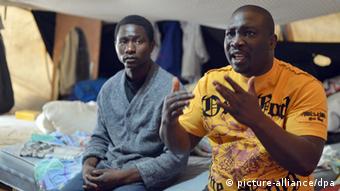 'The saddest day of my life'

"Lampedusa – Village in Berlin" reads a large, somewhat faded banner which hangs over a small camp in the middle of Berlin's Kreuzberg district. Refugees from all over the world have been living here for over a year, protesting against the conditions for asylum seekers in Germany.

Laundry hangs over the grey tents to dry, and next to a large plastic coffeepot is a box of small green apples. In the kitchen, itself a tent, dirty plates and bread damp from the rain are lying around. A couple of men stand under a tree, talking. Like Johnson and Mati Ofore, many of them boarded boats full beyond their capacity and lost friends, siblings and children on the journey. "But the journalists only come when a large boat sinks," says a young man, his voice full of scorn and anger.

Bashir, a Nigerian, nods. "Europe does nothing to save the refugees," he says. The day of May 27, 2011, is etched in his memory. On that day, the boat which he had been forced into by Libyan soldiers sank off the coast of Lampedusa. Bashir, who had been working on a construction site in Libya, was rescued. Both his children died. Bashir's voice also sounds angry and reproachful: the refugees made emergency calls to the Italian, Tunisian, even the Maltese coast guards, but by the time help came, it was too late. 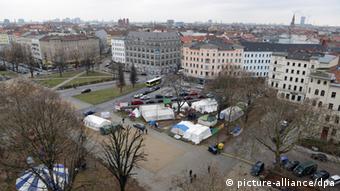 Johnson, too, will never forget the day that his younger brother died. "I cried all day," remembers the 43-year-old quietly. Since then he has had trouble sleeping. He sits in his gloomy tent on the camp bed he has shared with another refugee for six months.

Johnson rummages around in a small suitcase and pulls out some photographs: one is of his sister, still in Ghana, smiling for the camera. But he does not have a picture of his brother Mati. Nor of his brother's three children, whom Mati left in Ghana hoping to send money from Europe.

Johnson kept telling his brother that he should try to find a job in Libya."If you find work, if you have money, Libya is good," he remembers saying. He shakes his head. He gestures around the gloomy tent and narrow camp bed, at the same time taking in the soggy bread in the camp kitchen and his plastic sandals and thin tracksuit. In spite of it all, he wants to stay in Germany and work. Ultimately he now has to take care of his brother's family too – the brother he never had the chance to say goodbye to.

There was a lot of outcry from European politicians following the recent Lampedusa refugee tragedy. But their concern only goes so far, as the EU interior ministers seek solutions that will cost them nothing. (08.10.2013)