Amid ongoing pro-democracy protests, French climber Alain Robert scaled a Hong Kong skyscraper with a reconciliation flag. Robert said he hoped to "raise a smile," but many were less than pleased with the stunt. 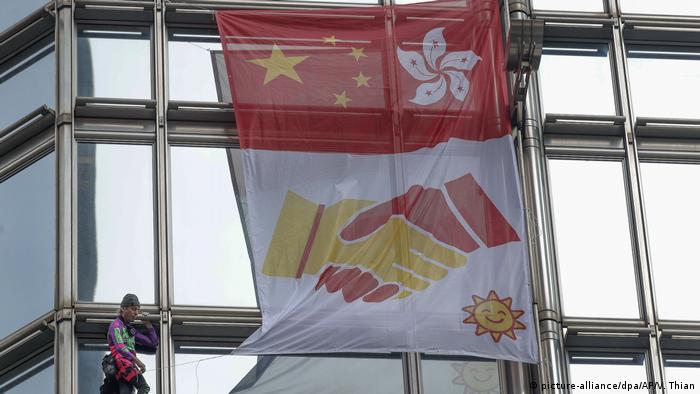 Alain Robert, a climber dubbed the "French Spiderman," clambered up a building in Hong Kong on Friday, hoisting up a flag meant to symbolize reconciliation between the territory and China.

The 57-year-old, who is known for carrying out unsanctioned climbs without a harness, was arrested after completing the climb. He'd been banned from scaling buildings in Hong Kong last year, but his ban ended two weeks ago.

The climbing stunt and newspaper ads come as Hong Kong prepares for more pro-democracy demonstrations over the weekend after over 10 weeks of massive and sometimes violent protests.

Ahead of his climb, Robert released a statement saying that the point of his stunt was to make "an urgent appeal for peace and consultation between Hong Kong people and their government."

"Perhaps what I do can lower the temperature and maybe raise a smile. That's my hope anyway," Robert said in the statement. 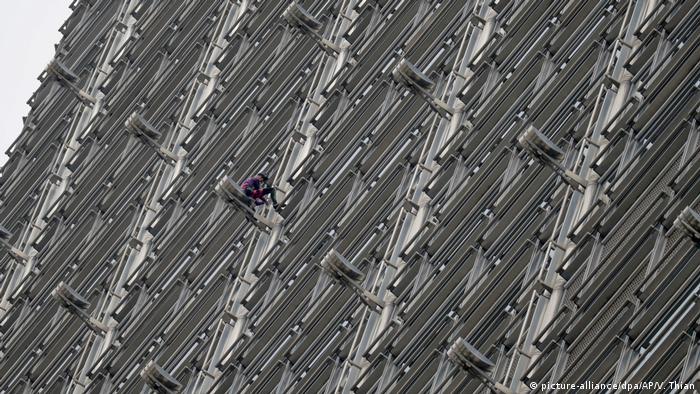 Many, however, were less than enthused with Robert's message.

"This shows many foreigners don't understand the underlying issue between Hong Kong and China," one user wrote on a popular online forum.

The protests in Hong Kong were initially started to oppose a bill that would allow the territory to extradite people facing criminal charges to mainland China, but the movement has expanded to include wider calls for democracy.

Over 700 people have been arrested since the protests began in June, with police frequently using tear gas in an attempt to disperse protests.

The movement poses the biggest threat to Beijing's authority in semi-autonomous Hong Kong since the territory was reverted from British to Chinese rule in 1997.

Why China won't send the tanks into Hong Kong

There are reasons why the paramilitary troops of the Peoples Armed Police have not yet rolled across the border crossing at Shenzhen to crush the protests in Hong Kong. Chiefly because China needs Hong Kong. (15.08.2019)