French journalist Ursula Gauthier is preparing to leave China after being effectively expelled by authorities. She was condemned for her article on China's "anti-terror" operations against Xinjiang's Uighur Muslims. 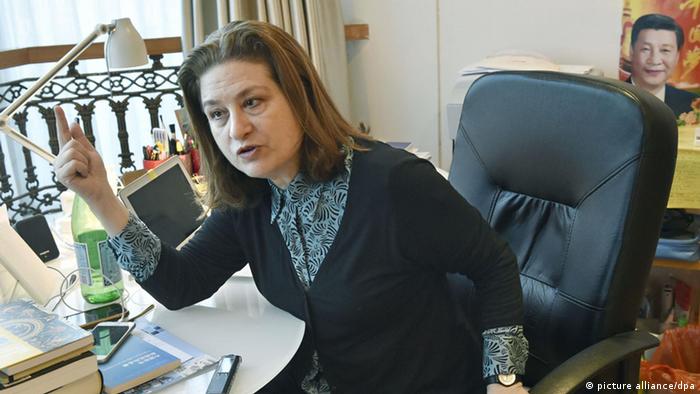 Gauthier, who is based in Beijing and works for the news magazine "L'Obs," is due to leave the Chinese capital on a 1 a.m. flight on Friday (Thursday, 1500 UTC).

Speaking ahead of her departure, she told the AFP news agency that she has been left with "a very strong feeling of surreality" on her last night in Beijing.

Chinese authorities refused to renew Gauthier's press card earlier this month, leaving the journalist unable to apply for a visa. The move came in the aftermath of her essay, "After the attacks [in Paris], Chinese solidarity is not without ulterior motives," published on November 8.

Her report questioned China's motives in expressing sympathy for the victims of the Paris attacks, criticizing that they were calulated to link Beijing's harsh policies in Xinjiang - where most of China's ethnic Uighur Muslim minority lives - with the fight against global terrorism.

Chinese officials said the report justified violence against the government. "The article criticized China's counterterrorism efforts and denigrated and slandered Chinese policies. It provoked the strong indignation of the Chinese public," the foreign ministry said earlier this month.

Gauthier's essay also triggered abusive comments from social media users in China and was condemned by the state-run "Global Times" and "China Daily."

"They wanted me to apologize publicly for my wrongs," Gauthier said, "But my wrongs were all invented by the Global Times."

After receiving death threats, Gauthier said she didn't contact authorities as she "did not expect the police to take the case seriously."

"Ursula Gauthier should go to the police if she really believes she is threatened," Lu said. "Instead she is flaunting it in front of the press which is rather unusual, unless she is doing it for other purposes."

Back home in France, Gauthier's expulsion has sparked outrage among the French media, who have condemned the "abusive treatment" of the journalist.

Press organization Reporters Without Borders also denounced the incident, calling it "media lynching" and a "campaign of defamation and intimidation" against Gauthier. According to the organization's press freedom index, China sits in position 176 out of 180 countries.

The last time China refused to renew a foreign reporter's press credentials was in 2012 when Melissa Chan, a reporter for Al Jazeera, was accussed of violating Chinese regulations. At the time, Chan's expulsion was the first such case in 13 years.

China still prefers a great wall around the press

China's expulsion of the pan-Arab Al-Jazeera news network's only English-language reporter in China highlights the country's deep-rooted sensitivity about the foreign media. Its anxiety is echoed in other parts of Asia. (10.05.2012)