Six migrants have each been sentenced to one month in prison after jumping on a British ferry in the French port of Calais. The sentences came as migrants in the port town's "Jungle" refugee camp prepared to be evicted. 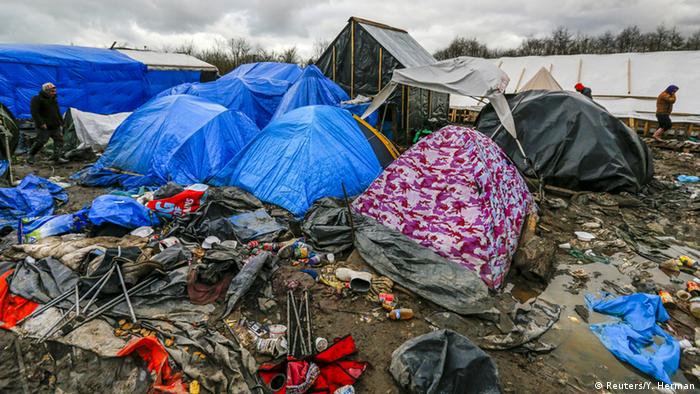 The six migrants were arrested on January 23 after 150 to 300 people made their way to the fenced port site in Calais as a demonstration by migrants and activists was ending. A few dozen migrants managed to make it onto the ferry before being escorted off by police.

On trial alongside the one Syrian, one Sudanese and four Afghans were two activists who were each handed down a fine of 300-euro fines ($330). As the migrants had already been in prison a month while awaiting their trial, they were immediately released after conviction.

The prison sentences on Monday came just a day ahead of the 7:00 p.m. deadline (1800 UTC), by which time people in the southern half of Calais' "jungle" must have left the site.

According to Calais' local government, there are currently around 3,700 people living in the Jungle, with 800 and 2,000 expected to be affected by the eviction.

French Interior Minister Bernard Cazeneuve said the eviction would be done "progressively, by persuasion and with respect for people's dignity."

The eviction notice has been met with a torrent of criticism from charities as well as prominent figures. Many of the refugees currently living in the camp are fleeing civil war and conflict in Syria, Iraq and Afghanistan, others from Africa are fleeing countries with poor human rights records.